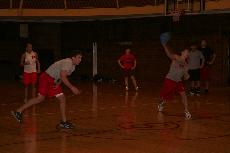 The Simpson Intramurals dodgeball tournament was held on Saturday Jan. 31. Teams played during the week to see where they would be placed in the bracket. It was a single-elimination tournament.

Each game was made up of five sets of standard dodgeball, meaning that once all of one team’s players are out they lost the game. Whichever team won three out of the five games moved on to the next section of the bracket, and so on until the championship round.

The date of the tournament, on a Saturday night, deterred some teams from participating, but the event sill saw an increased turnout.

“The Saturday night tournament is a little hard to get teams out,” Darling said. “So there were a couple teams that didn’t show up to the tournament, which I kind of expected that.”

This year’s tournament brought out 14 teams, one more than the previous year.

There were also more freshmen teams than normal, which according to Darling, is a good thing because they are becoming more and more involved and that helps with the overall competitive feel for the game.

“Overall I think it went well,” Darling said. “We had three freshmen teams which is good for this time of year to get teams from the younger grades volunteering to participate.”

Dodgeball is one of intramurals’ shorter league activities, but Darling thought it was still pretty fast-paced.

However, due to the timing, the fan base was smaller than normal and the costumes weren’t as abundant.

“This year it was pretty low-key, but the same people enjoyed it just the same,” Darling said.

According to Darling, most of the games were competitive, and some went down to the wire.

Although Wolfe works for Intramurals, he didn’t think it helped him any in the tournament.

“Working for Intramurals doesn’t really give me an advantage, but it does help me know who all the teams are, and then I can tell who I have to look out for on the court,” Wolfe said.

After his team won last year’s tournament, Wolfe was hoping for another championship T-shirt to add to his collection. However, he thought the competition was a lot better than last year.

“There just seems to be more talent playing this year,” Wolfe said.

The winner of the tournament this year was the team Balls Deep, led by Chris Jones. They defeated the team Droppin Balls, a freshmen team, in the championship game. It was a hard fought battle as well as a long night for both teams, but in the end, to the victor goes the spoils.