Storm baseball gets flexible in offseason 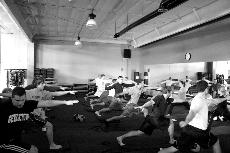 As the baseball team prepares for the upcoming season, they have added a new method of training: yoga.

For those unfamiliar with yoga, it can be described as a system of exercises practiced to promote control of the body and mind, originating from the Hindu discipline, which mainly includes stretching and core work.

The question for coach Ben Blake is, why yoga?

“Well, the guys run the offseason program, and they were looking for something else to do,” Blake said. “The players asked around, and my dad (pitching coach Joe Blake) suggested yoga for balance and core strength.”

Along with yoga, which the team practices on Mondays, players have been doing many other types of exercises before the season kicks off this spring. Along with lifting weights, the team does various agilities, line-jumps, three-man weave basketball drills and many stationed exercises in which they jump from stations during a session. The team also throws and plays catch nearly every day to keep their arms in good shape.

These offseason workout regiments, which under NCAA rules cannot be led by the coaches, have been led by the senior baseball players.

Senior infielder Jesse Reis, who got the yoga idea from Ben Blake, is one of the leaders that has been getting everybody to the workout sessions and working hard throughout the offseason.

Reis has enjoyed the dedication by many of the players who have stayed motivated during the offseason and worked hard with everything, including the yoga.

“It’s the first year everybody has actually gone through and stayed consistent with the workouts,” Reis said.

“[Senior catcher/first baseman] Curt Bjork and I make up the stuff we do for the most part,” Reis said. “Ball throws everyday and core stuff is what we like to work on.”

To the younger players, the workouts seem to be going quite well. Sophomore outfielder Tyler Pearson said he has seen the benefits of the hard offseason work.

“The workouts help a lot for baseball specifically,” Pearson said. “In baseball we use a lot of core muscles that may not show, but are definitely used during games and practices. Workouts are fun, and it helps to build team chemistry by working with teammates through these tough exercises.”

All of the work has gotten the approval of the head coach but Blake has been surprised by their enthusiasm.

“I expected them not to like it and mess around, but they enjoyed it,” Blake said. “This year has been a great year. We leave it up to the guys to make themselves better and for the most part, that’s up to them.”

The true judgment of the offseason work will come March 7-14 as the team travels to Phoenix, Ariz., for a preseason tournament. The first home game for the Storm will be on March 20 against Cornell College at 6 p.m. Until the team is able to hit the field, players will be hitting the mat on Mondays, keeping up with the yoga.