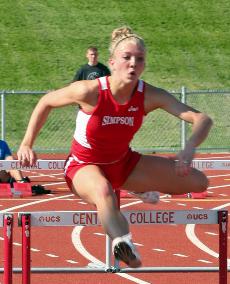 When Lauren Bucklin participated in her first season of track at Simpson College, she would admit that she wasn’t fast and didn’t have proper technique. Now, as a junior, Bucklin is No. 1 in the 55-meter hurdles in the IIAC.

Bucklin automatically qualified for the NCAA Division III Indoor Track & Field National Championships when she ran a time of 8.18 seconds in the event at the Buena Vista Dennis Young Classic on Feb. 14, placing her fourth in Division III. She also broke the meet record of 8.43 and broke the Simpson record as well.

Coach Dave Cleveland said Bucklin’s mentality is what makes her so strong.

“She is always thinking about how she can get better,” Cleveland said. “She never wants to leave until she has gotten it.”

“This year, I have stayed more focused and always try to practice perfect,” Bucklin said.

The IIAC currently has five 55-meter hurdlers who have reached the provisional qualifying time. Bucklin is currently the only automatic qualifier.

Cleveland said coming into the season, he worked with Bucklin on pinpointing a few details to work on.

“We wanted to address a couple of things that she and I knew that she could get better at,” Cleveland said.

Bucklin said her main goals coming into this season were to eat healthy, make the top three at conference, and place higher at Nationals than she did last year.

“Last year was a new experience for me,” Bucklin said. “I am going to try to go in more calm and try to place better. I definitely want to run a good race in preliminaries to set me up well in the finals.”

The IIAC has five girls listed in the top 13 55-meter hurdlers in the nation.

“Lauren is fourth in the country, but five, six and seven are all in our conference,” Cleveland said. “Our conference is really good in every event. That keeps you sharp.”

The IIAC recently named Bucklin Athlete of the Week for her automatic qualifying time. They also honored her success in the 4×200-meter relay where her and her teammates are ranked second in the IIAC and her open 200-meter dash which is ranked sixth.

“I definitely think my fastest sprints will come from my team events,” Bucklin said. “I want to help them be successful, because in turn they help me.”

“She pushes everyone on the team,” Sabers said. “She is almost like a coach, especially where Coach Cleveland can’t always be there.”

Sabers said the entire team cheers each other on and that’s what really counts.

“Everyone has their bad races, bad days,” Sabers said. “Lauren is one of those teammates that lifts you during that time.”

Bucklin said she wants to be a role model for the other hurdlers.

“I want to show the other girls that working hard in practice affects you and goes over into your performance in meets,” Bucklin said.

Bucklin, along with her Simpson teammates, will compete in the IIAC Indoor Conference Championships hosted by Wartburg College on Feb. 27-28.