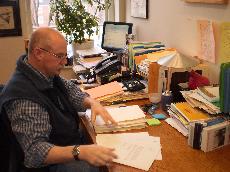 Mark Freyberg, associate professor of sociology, did not always want to be a teacher. It was not until one of the classes he took at the University of Wisconsin Green Bay influenced him and he decided teaching was the career choice for him.

“I pretty much just thought that I was going to end up a bum, until I think it was my junior year in college,” Freyberg said.

The class that helped Freyberg find his calling was called Social Change.

The first day of the class the teacher came in complaining about former president Ronald Reagan’s administration.

“It was just mesmerizing, I mean I was just transfixed, I wanted to get up and yell like ‘yes!’ You know?” Freyberg said. “By the time he got done, I knew I wanted to teach college,”

After Freyberg told his thesis adviser for his master’s degree at the University of Michigan that he wanted to teach at a liberal arts college, his adviser tried to talk him out of teaching because he said he would get tired of it.

“If you’re attending to your students, how can teaching get old?” He said. “It can’t. The students are different every year. If the students change, your teaching changes. This job will never get old for me, that much I know.”

Freyberg grew up in Appleton, Wis., a town that he says was much like Indianola.

Both agricultural towns have a college at the heart of them. The only difference between them, Freyberg said, was that Appleton’s “townies” did not get along with the college students very well.

According to Freyberg, Appleton was a very conservative town, so moving to Indianola was different than what he grew up in.

Freyberg felt that Indianola was a great choice to move to after school. He wanted to teach at a school in the Midwest and live in the country. Freyberg also knew he wanted to teach at a liberal arts school, as opposed to a large university, so he could have close interactions with his students.

“I really like to see students think differently about the world that they are in and about how they can alter the world they are in,” Freyberg said. “I think the thing that I take maybe the most pride in is helping them to see what they can become.”

Freyberg believes that he has a different background and a different teaching style than most professors. He spent four years in the navy, where he was able to meet different people and learn how to interact with them differently.

Freyberg’s favorite parts of teaching are the advising aspect and watching his students grow. He also enjoys it when he hears from his former students.

“I am very, very happy here at Simpson, I couldn’t imagine myself anywhere else,” he said.