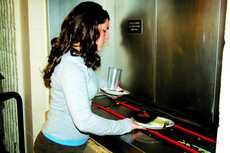 Starting Feb. 24, Pfeiffer Dining Services will be going trayless on Tuesdays as Simpson continues on its path towards sustainability.

“A few of the many projects include Simpson’s recycling program and the new Earth-Corps Program,” Shelton said. “The meetings are open to everyone and I encourage interested people to join.”

The plans for “Trayless Tuesdays” in Pfeiffer will go through March. If the idea goes well, Stairs hopes that campus can be trayless by the month of April.

“We’ll be reducing the amount of water that we use,” Stairs said. “We’ll be monitoring our water usage before and after. I’m optimistic about our results.”

Another reason for not using trays is to save food and reduce food waste. Using fewer plates in one trip and not grabbing as much food the first time through the buffet could potentially cut back on food consumption. Trays have already been taken away the in Storm Street Grill and Stairs said he has received e-mails from students excited about the changes.

“I think that Pfeiffer going trayless is a great thing,” Shelton said. “It will not only raise awareness, but the most important thing is that it will also conserve water. It may be an annoyance at first for some, but it is a simple culture change that people can make in their everyday lives towards a more sustainable practice on campus.”

Bus tubs will be set up for used plates, silverware and glasses, because they will not fit on the belts that students normally put their trays on when they’re finished.

“It has been talked about in the past,” Tillotson said. “Blair is really motivated about saving in our food service areas, and that is fantastic.”

The EAC would like to eventually see other changes across campus, which would include more recyclable items and materials. The EAC also contributed to reducing consumption by placing new napkin holders in Pfeiffer and the Grill, which encourage students to take fewer napkins and reduce the amount of paper that needs to be recycled.

The sustainability group on campus also has many other plans, some of which include enhancing the recycling program here at Simpson. According to Shelton, the program is ready to be set in place and all students will have access to recycle bins.

“We currently have bins to distribute to all of the students,” Shelton said. “We are just waiting for the larger bins from McCoy Sanitation that will hold the recycling materials once students start using them. We hope to implement this program as soon as we possibly can. After the program is implemented, we hope to assess the amount of recycling that was diverted from trash.”

Simpson’s efforts to save, recycle, and reduce consumption are small right now but according to Shelton, the baby steps will only get larger with student support.