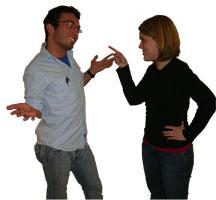 Dear Drew and Meridith,”I saw my boyfriend on Facebook in compromising pictures with another boy, and I think they might be a little more than friends. How do I confront him about it?”

Oh boy. A saucy homoerotic scandal! I love it!

Let’s start by talking about this other boy.

Has your man mentioned him before? Is this a new kid in the picture, who all of a sudden your boyfriend can’t stop talking about? When he talks about their latest adventure, does he light up and smile constantly, like a child on Christmas? If you answered yes, chances are your Romeo might actually be a homeo.

Now, if it’s one your boyfriend’s best friends, it gets a little complicated. It simply could be them being completly comfortable with themselves, and it’s all in good fun.

Or, they could be best friends turned lovers. Think Brokeback Mountain, (even though Heath and Jake didn’t start as BFF): two “straight” guys, goofing off, wrestling around, and then, one ill-placed hand led to another and the next thing you know, wrestling took on a whole other meaning and now they’re in love.

Either way my friend, there’s actually no point in confronting your possibly bi-curious boyfriend.

One of two things could happen. He’s either 100 percent heterosexual and you’re were just reading too much into his fun – and probably drunk – photos, and he’ll get really upset with you for even questioning his sexuality.

Or, he confesses he’s been having an illicit love affair with this photo playboy and you end up being that girl that got dumped by her boyfriend for a guy. So, either way it’s a lose-lose situation for you.

But if you do confront him, let him know that it is totally okay if he is gay. I mean, if he really has these photos on Facebook then half of campus probably already thinks the same thing. Just remind him that we all still love him.

And if he does admit it and let you know you just don’t have the right equipment to make it work anymore, give him my number.

First things first. How bad are these pictures? Obviously they are pretty bad if you have jumped to the conclusion that they are more than just friends. Are you simply overreacting and misjudging a picture, or is the relationship you assumed to be a Batman and Robin relationship in all actuality the Ambiguously Gay Duo? Don’t go dragging him out of the closet just yet.

I would suggest that you don’t run to him and confront him until you have more proof to back up such accusations. As a group, college kids tend to get slightly inebriated on the weekends and take pictures that may imply things that they don’t intend to. Maybe you should look at your own Facebook pictures and make sure you don’t have compromising pictures of you and your roommate, or you and that girl from freshman year before you make huge assumptions.

If you don’t have any other supporting evidence, turn to Google. I honestly didn’t know what you should be looking for, so I simply Googled “How to tell if your boyfriend is gay.” Google suggested warning signs like he has gotten more manicures and facials since you’ve been together than you’ve gotten in your whole life; he often admires how good he looks in your skinny jeans; he and his best friend seem a little too close; he loves to skip and/or his iPod is filled with show tunes and old Cher CDs.

Compromising pictures of him and some other dude on Facebook didn’t make the list, and Google never lies.

Despite popular belief, there is no grand stereotypical characteristic that will determine if your boyfriend is gay. I would suggest you be honest with him. Next time you’re at his place, log on to his computer and ask him about the pictures on Facebook. He might have a relatively understandable explanation, or he may profess his undying love for his best friend. Either way, at least you’ll be able to stop beating yourself up about it.

My final advice is this: if he is more than just friends with this other guy, he obviously wants to be caught if the pictures are already on Facebook. Maybe he’s just waiting for you to ask.