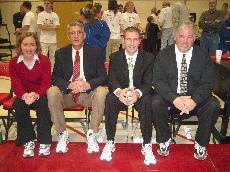 The men’s basketball team did their part in fighting cancer this past weekend. Jan. 31 was the Coaches vs. Cancer fundraiser at the team’s home basketball game.

Coaches vs. Cancer is a collaboration between the American Cancer Society and coaches from across the country. The fundraiser was started by Norm Stewart from the University of Missouri and Jim Beheim from Syracuse University. It is installed through the National Association of Basketball Coaches.

“This is our second year of doing it,” coach Bruce Wilson said. “We have many opportunities to choose from but we did the Suits and Sneakers one.”

For the Suits and Sneakers fundraiser, the coaches on both teams wear their suits, but instead of the usual dress shoes, they wear tennis shoes.

“Other schools have done golf tournaments or put in a certain amount of money for every three pointer,” Wilson said.

Suits and Sneakers is a single-day event to raise awareness for cancer. There were donation jars at the entrance to the game for anyone to give money and a silent auction for an autographed basketball. Last year they made $600. This year’s event raised $314.

Wilson is also hoping that the success with the fundraiser will lead to success on the court.

“We have [four] games left,” Wilson said. “We are a young team, and hopefully we can put it all together for these last few games.”

With only three seniors, sophomore guard Dave Johnson and sophomore forward Reid Branderhorst are among the young players that will help the team move forward.

“This season is going pretty well,” Johnson said. “We have the chemistry, we just need to put it all together.”

In order for them to put it all together, they need younger players to start taking the lead.

“We are very young and need everyone to step up,” Branderhorst said. “We need more than the seniors to step up.”

In order for players to step up, Wilson said they need to start making their shots.

One thing that hasn’t helped with the low shooting percentage is the injuries the team has had to overcome. Johnson was out for a few weeks with a sprained ankle.

“It hurt when Dave got hurt,” Wilson said. “He is a definite outside scoring threat.”

“We kind of became one dimensional,” Wilson said. “It was difficult for Tim [Dunlavy] to get through double teams.”

With five games left, the Storm hope to get on a roll going into the conference tournament.

“We are very capable of winning these last games,” Wilson said. “We have been tested and know what we need to do to win.”

The Storm have four losses to teams in the top 25 and have defeated Grandview, who is winning their league.