Call of the city rings loud for small town girl 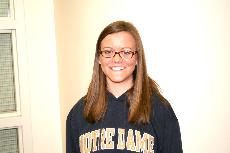 To Gov. Culver, all of the community development committees and everyone else working to keep local college graduates in Iowa, I’m sorry. It’s unlikely I’ll be sticking around.

Sometimes I feel guilty about ditching the state that has treated me so well for the past 21 years, but a new poll by the Pew Research Center revealed I’m not alone in my desire for a new place to call home.

Not only young Iowans, but 46 percent of Americans said they would prefer to live someplace different than they currently do, the researched showed.

There are several reasons for why I plan on leaving the state. I feel the call of the big city. I’d like to live in a New York or a Boston, at least for a while. I’d like to report on national politics, and come 2011 when caucus season rolls around maybe I’ll be back.But until then, Iowa’s not exactly a national political hub.

There are other reasons too, some beyond the control of any government official or neighborhood betterment member. For example: Iowa’s weather. If you can guarantee me 70 degrees and sunshine year round, I may reconsider. Of course if you do figure out how to regulate the weather, I’m guessing you have larger priorities than trying to get me to stay in good ol’ Iowa.

I hate to complain too much. I actually really enjoy winter, but if there’s going to be frigidly cold temperatures and inches upon inches of snow, I’d at least like it to be on some mountains that I could ski down. And of course I like the warmth and sunshine of summer, but I’d like it a whole lot better if it didn’t bring with it the high humidity and rotten allergies.

While two thirds of adults aged 50 to 64 would prefer to live in the country, 57 percent of young people, like me, crave an urban setting. Denver came in atop the list of metropolitan areas people would prefer to live. It makes sense to me; large city, warm summers. There is a lot of snow too, but the Rocky Mountains are a mere two hours away.

Not to mention, it’s a young city. If I’m going to slip on icy sidewalk and fall flat on my face like I did last week, at least there might be a cute guy or two to help me up.

Yes, the Mile High City seems like a pretty ideal place to take up residence.

The other top cities were also on the west coast. Seattle and San Francisco both made the list. Interesting, considering people would rather live in a city that has more McDonald’s than Starbucks.

Of course, politically, Colorado and Seattle, don’t rank much higher than Iowa. I’ll likely have to go out east for that.

Don’t get me wrong, Iowa was a great place to grow up, and I think I would prefer to raise a family in the Midwest. But until that time comes, I’ll be joining the other college grads ditching the green pastures for the concrete jungles of Chicago and L.A. But don’t worry Iowa, we’ll likely be back, someday.