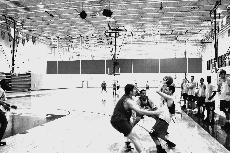 With spring coming just over the horizon and the winter sports coming to a close it is time to wrap-up how the seasons went.

The Storm wrestling team finished the season 2-12 and 1-7 in the IIAC. While the team did not have anyone advance to Nationals, they did have three fifth place finishes at the conference tournament. Sophomore Caleb Brus, junior Calvin Barber and senior Ben Hektoen all finished fifth at 141, 147 and 157 pounds respectively.

Head Coach Clint Manny was upset with the season but is optimistic heading into next year and only losing one senior in Hektoen.

“The best part about it is we only lose Ben Hektoen,” Manny said. “Obviously we’ve got some good young talent coming back so that’s something to build on. It was a learning experience with a brand new staff and we have got to learn to win.”

The Storm men’s basketball team finished the year 7-18 (3-13 IIAC) after losing 78-74 against Coe College on Feb. 21. Simpson finished ninth in the IIAC and failed to advance to the conference tournament for the second straight season.

The Storm will bring back a host of talent as they lose three seniors from this year’s team in forwards Aromeo Grigsby, Chris Mars and David Ferezy, who is Simpson College’s all-time leader in blocked shots.

Sophomore guard Dave Johnson was unhappy with the season but is optimistic when looking toward next year.

“We’ve got some stuff we have to put together still but I feel that will be accomplished,” Johnson said. “We have the talent coming back so I look towards next year being much more of a success than this year.”

The women’s swimming team finished up the year 1-3 (0-2 IIAC) and they also finished seventh at the Mutual of Omaha Invitational on Dec. 5-6 and 10th at the Liberal Arts Championships on Feb. 12-14.

Sophomore swimmer Andrea Benson was impressed with the team’s improvement and is looking forward to next season.

“From the first meet to the last we’ve really improved,” Benson said. “The team works extremely hard and hopefully it will pay off in future years.”

Leading the way for the men was junior Eric Patten who finished first in the 800-meter run and the mile. The 4×400 team with junior Kyle Yarkosky, junior Legrand Bien-aime, freshman Brandon Christensen and junior Marty Rounds took a second place finish.

Junior Lauren Bucklin had a record-breaking day for the Storm as she got a first-place finish in the 55-meter hurdles in 8.13 which broke the old conference record. Bucklin also helped the 4×200 team comprised of junior Alyssa Hedrick, sophomore Vanessa Evenson and sophomore Molly Sabers to a second-place finish. The 4×400 team made up of Hedrick, Sabers, Bucklin and Nicole Mulder also finished second place in the meet.

Another first-place finish for the Storm came when Senior Kayla Knaack won the weight throw with a launch of 50 feet 2 inches. Freshman Kinsey Bak got second in the high jump at 5 feet 1.25 inches, freshman Corie Peterson finished second in the pole vault at 9 feet 0.25 inches and freshmen Carissa Coopman took second in the shot put with a throw of 42 feet 11.5 inches. The distance medley relay of sophomore Catie Ellingson, Mulder, freshman Rachel Smith and junior Sarah Hammel came in third.