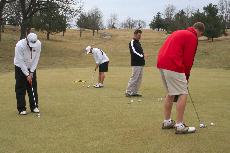 After a brief winter hiatus, the Simpson men’s golf team has been hitting the links once again to help prepare for the spring season.

This past fall, the golf team, led by coach Jason Marvelli, participated in six different meets, placing best in the Simpson Invitational. This upcoming spring, they will compete in seven meets.

Early on, a few players have stood out to Marvelli, who is in his first year as the head coach of the Storm.

“John Richter is the captain so we expect a lot from him,” Marvelli said. “Matt Spalding has also got off to a really good start.”

The team recently got back from a spring break trip to San Antonio, Texas, with the women’s golf team. While in Texas, the team traveled to a few different courses and enjoyed the seasonably warm weather. Junior John Richter had an excellent time not only learning more about golf, but also about his teammates and coach.

“We learned a lot about each other on the trip and even got to compare some stats to our coach during his college years,” Richter said. “No one on the team even came close to matching up.”

Sophomore Michael Peterson also enjoyed the bond that the team formed during the trip.

“It was a good team building experience,” Peterson said. “It should help us on the course throughout this season.”

The players weren’t the only ones that were positively affected by the trip.

“We had a great time,” Marvelli said. “There was a little bit of bad weather, but we played some great golf courses, and it was good to spend time together as a team because with everybody’s schedules ,we don’t always get to do that.”

The golf team currently is comprised of nine members. Although there are no seniors this season, the Storm is led by three juniors, and has a strong group of underclassmen, including four sophomores and two freshmen.

As the conference season rolls around, Simpson will be the host of the IIAC Conference meet.

Richter is glad to be hosting the tournament.

Marvelli sees the team as a likely dark horse in the conference tournament.

Peterson also has high hopes for the Storm this spring.

“We’re looking to get better and hope to improve every meet,” Peterson said. “If we end up top three in the conference, I think we will all be pretty happy.”