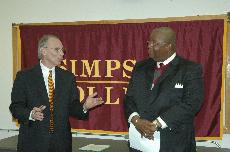 In its first year alone, the Simpson Urban Studies Institute has already made much more progress than it had initially expected.

SUSI was established to assist students with different research projects. The focus of these projects was mostly on disadvantaged citizens of Des Moines.

“I think one of the great advantages of student participation is that it’s helped introduce people to persons with different cultural perceptions here in the metro,” Fred Jones, professor of sociology and criminal justice and faculty director of SUSI, said.

The idea of SUSI originated when Jones shared the projects and research that Simpson students were already doing with the administration.

“President [John] Byrd and (Iowa congressman) Rep. Wayne Ford, who is the CEO of Urban Dreams in Des Moines, and myself had been interested in combining the research resources of a college with the human service provision capacity of an agency like Urban Dreams,” Jones said. “One of the functions of SUSI is to look at human service programs like those at Urban Dreams and to evaluate those programs so they can become more effective for the people who need that kind of help.”

Recently, SUSI implemented three different research studies that were sponsored by Simpson faculty and completed by students. One was a study of needs analysis in the River Bend neighborhood of Des Moines.

Jones said the River Bend survey “looked at three different data sources comparing perceptions and needs of community leaders, supervisors and human services agencies, then actual residents,” Jones said. “One of the conclusions was that what leaders and providers identify as the most important needs are not always what the people feel are the most important needs.”

The second study was on cultural sensitivity and involved interviewing minorities in the Des Moines area.

Jones described the prison education courses as being successful.

Junior Kiki Wilson is one of the students currently participating in the prison education program.

“We teach a creative writing class on Tuesdays from five to seven,” Wilson said. “Each week we give a pretty structured lesson, then we have a mini-lesson.”

Wilson said assisting the women at the prison has been a great experience.

“I was pretty nervous when I first began, but the women really want to learn,” Wilson said. “They reach out to us as well.”

Jones said so far, more than 150 students have been involved with SUSI. He also said this spring other SUSI-sponsored initiatives will be commencing.

“We’re working on two projects with Planned Parenthood,” Jones said. “SUSI is sponsoring the “V Day” play. [Playwright Eve Ensler] has written a play primarily focusing on women in prison, so we’re sponsoring a presentation at North High School in Des Moines. We’re also presenting a documentary and panel discussion about the movie in April at the Casady Building in Des Moines.”

Other projects will help certain majors here at Simpson.

“We’re just in the process of establishing a translation service in conjunction with the foreign language department,” Jones said. “It’ll be operated through SUSI and provide primarily Spanish students an opportunity to do both verbal and written translations for persons in the Des Moines metro area that don’t speak English.”

Jones said that he hopes students will take advantage of all that SUSI has to offer.

“Students should be asking ‘what can SUSI do for me?'” Jones said. “If they have an idea about a potential project, they can contact me and I’ll be glad to talk with them about it. If we can identify a faculty sponsor, it can probably be done.”

The Simpson community believes that SUSI will be a very worthwhile program.

“It sounds like it helps a lot of people,” sophomore Kellyn Pappas said.