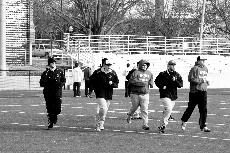 After a trip to Arizona, over 20 games and plenty of close calls, the Storm baseball team has been having a successful season. Through April 7, the Storm had a record of 15-10 and sat at third place in the IIAC at 5-4.

Much of the success this far into the season has to be due to the senior leadership on the team. Senior starting pitcher Jared Sass, who is 3-1 with a save, is very excited with what the team has done up to this point but is not ready to relax.

“I’m satisfied but not content,” Sass said. “There are some close games in Arizona we should have won, but we’ve been there and that experience will help us deal with the tight games.”

Currently at the top of the conference is Luther College. The Norse have only played three conference games but have won them all. Simpson sits third behind Luther and second-place Buena Vista University who is 4-1 in the IIAC.

Senior Cory Dawson has been splitting time at first base and designated hitter. Dawson has been happy with the season’s results even though he knows the team can do better.

“I think it’s so far been going how I expected it to,” Dawson said. “Early everyone starts out slow. We’re winning games and we’re not even close to where we want to be.”

One thing giving the Storm motivation to win the regular season conference title is the fact that Wartburg College has not had the success they have had in recent years. Wartburg has won at least a share of the regular season title every season in the last 12 years. The Knights sit at 10-11 (2-4 IIAC) so far this season.

Senior infielder Jesse Reis has high expectations for the team going into the rest of the season.

“First off, it would be really nice to win the conference outright,” Reis said. “Wartburg has done it for 12 or 13 years and it would be nice to knock them off their high horse.”

Sass knows that while winning the regular season is everyone’s goal, the team still has to work hard to even be in that position.

“BV has had a really good start, they have been kind of the surprise team, leading the conference and doing well,” Sass said. “Wartburg will probably turn it around soon and Luther and Coe have both been really strong.”

Dawson’s goals align with those of Sass and Reis.

“Winning the regular season conference and being a conference champ going into the postseason would definitely be cool,” Dawson said.

Looking further into the end of the season and postseason, Reis is optimistic after the way things have been going.

“There is always room for improvement but that is the way everybody feels,” Reis said. “We’re really close to being really good.”

The Storm has many more conference and non-conference games before the IIAC tournament, which will be held May 7-9. The destination is still to be announced.