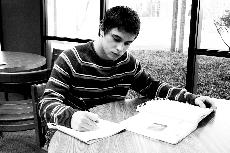 Senior Jayna Fischbach has been honored as a member of the Storm volleyball and basketball teams. Fischbach is a double major in biology and Spanish.

Sophomore Andrea Benson has been honored as a cross country runner in the fall and a swimmer in the winter. Benson is a math major.

Both athletes said they care a lot about their studies, but have to plan ahead.

“Sometimes, it can seem a little overwhelming,” Fischbach said. “I make sure I always get done what I need to get done before I do what I want to do.”

To be eligible for IIAC All-Academic Team honors, a student athlete must play at the varsity level, have at least a sophomore standing and have a GPA of 3.5 or higher.

“My coaches always understand that academics come first,” Benson said. “When I go on trips, I always do homework on the bus.”Senior Kendra Frush also earned All-Academic honors for the Simpson swimming and diving team. Frush is a double major in biochemistry and math.

Sophomore Caleb Brus earned Academic All-American and Academic All-Conference honors. He is majoring in international management with a minor in French.

“A lot of time in wrestling, I don’t go out as much,” Brus said.

Brus said he chose a DIII school so he could wrestle and get a private education. Brus was one of the 11 wrestlers in the IIAC to earn academic honors.

Seven members of the Storm basketball teams made the Academic All-Conference team.

Junior Andrew Dau is a member of the Storm men’s basketball team. Dau is a computer science and math major.

Juniors Katie Kitzman and Emily Smith and sophomore Katie Inghram also received honors for the women’s basketball team. Kitzman is a sports administration major and Smith is an athletic training major with a minor in exercise science. Inghram is undecided upon a major.

Brus, Fischbach and Benson all said that the teachers at Simpson contribute to their success in the classroom.

“My professors, for the most part, are all really helpful in explaining things to me when I need help,” Fischbach said.

Benson said the Simpson Hawley Center always helps her with her papers.

“I go to Hawley quite a bit,” Benson said. “It’s always nice to know that someone is there to help.”

The All-Academic Team is comprised of 30 juniors, 25 sophomores and 18 seniors. Luther College has a Conference-high 18 honorees. Coe College had 13 student-athletes on the team, followed by Simpson and Loras College with 10 each.

Out of the five winter sports, 45 of the honored student athletes are basketball players, 29 women and 16 men. Seventeen of the honorees are swimmers, 12 women and five men and the final 11 are wrestlers.

“It’s just something I have to do,” Brus said. “I am proud of it and it’s something I want to do the next two years.”