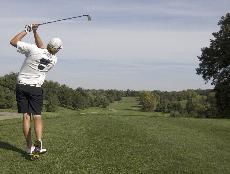 The Simpson men’s golf team took first place in their own Simpson Invitational on Sept. 15. They look to carry that momentum through the rest of their season.

Simpson’s win at their home meet gave the team a confidence boost, something junior Matt Spaulding hopes will continue throughout the rest of the meets.

“The season hasn’t quite got off to the start that we were looking forward to, but finishing first as a team in our home meet on Tuesday the 15th certainly got things going,” Spaulding said. “Hopefully we can take that and keep it going throughout the season.”

“We played Tuesday here (Indianola Country Club) in our fall invitational and we played extremely well,” Marvelli said. “The best we have played since the beginning of my couching tenure, which is about 13 months.”

The team shot a 298. Spaulding had a career-low of 68, which was three under par and one shot off of the competitive course record at the Indianola Country Club.

Spaulding said that the team has great chemistry and a determination to improve every time they step out onto the course.

“Our team is a really close group,” Richter said. “Everyone works hard to get better, and it’s good to have competition within the team which helps to make everyone better. The team is pretty young, so we lack a little of the competition experience.”

Senior Jon Sukut said that while there are a few newcomers to the team, the leadership on the team is still very much the same.

“I’d say our biggest strength is that we did not lose a single person from last year,” Sukut said. “We have everybody back, which is good. And we still kind of have that same core of people competing for varsity spots.”

Sukut added that while the chemistry and the leadership are good, there are still several things the team can do to be more competitive.

“We all have parts of our game that we need to work on,” Sukut said. “We just need to focus on that and try and eliminate each person’s weakness in their game so we don’t get in trouble as much.”

Marvelli pointed to their work ethic as one of the team’s strengths.

“We’re working hard,” Marvelli said. “Every player on the team besides the freshmen have had one year under my tutelage, and I think they know what my expectations are and what my work ethic is.”

Players also talked about the conference season this coming spring and about their goals for the rest of the season.

“The goals are to get our team scores consistently around 310 and finish strong in each tournament,” Spaulding said. “I know we are looking forward to improving on our conference finish from last year next spring.”

Marvelli talked about his expectations for the fall season and how important it is to make the most out of every trip to the course.

“We work hard,” Marvelli said. “Our season is short, and I expect a lot out of these young men during our season because it comes and goes so quickly.”