New faces on the court 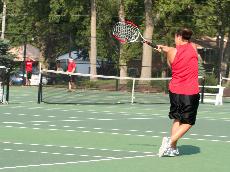 There is a positive energy that fills the air stepping onto the Simpson College tennis courts. All 15 students know the schedule by heart as they run their laps around the court and do their warm-up drills.

Despite the smaller team size and loss of upperclassmen, head coach Lindsay Chase has high hopes for the young, close-knit team.

The Simpson women’s tennis team consists of one senior, one junior, two sophomores and six freshman. Only two of the players are returners.

The Simpson tennis team is a little bit different this year, as Chase coaches both the men’s and women’s teams while the Athletic Department searches for new men’s coach.

There are currently five men on the team, but sophomore Daniel Schneider is hopeful that more will go out this year.

“There is a lot of opportunity to make a great team,” Schneider said.

Junior Jill Berner, who is the women’s team captain, feels that although they are a young team, they have a lot of opportunity to grow because they are a hard working group.

“We just have to go out and play our hardest,” Berner said. “We can really compete if we put our minds to it.”

Freshman Lindsay Nash said that even though there aren’t many upperclassmen on the team, they are the best role models on campus. She said the team did not take long to bond, which helped the freshmen feel like they made the right decision for going out.

Nash said she feels right at home on the Simpson Tennis team, saying Berner had a lot to do with her going out for the sport.

Chase also noticed Berner’s positive personality and respects her for getting so many girls interested and involved in tennis and other Simpson events.

Berner “really got a lot of us involved and wanting to play,” Nash said.

The girls and Chase all agree that Berner is always keeping the atmosphere positive and is a great asset to the team.

The team may be lacking in experience being so young, but they have a lot of room to grow. Chase said she is encouraged and proud of the girls already this season.

“We’re in a pretty tough conference, but the girls have filled some pretty big shoes in the varsity line-up and they continue to grow and develop as a team,” Chase said. “The team has a lot of potential as they’ve already shown. I look forward to the rest of the season.”

So far this year, the girls are led in singles by sophomore Allison Anderson with a 2-0 record and Berner as captain. Sophomore Lynae Gruber and freshman Mikayla Struebing close behind each with a 1-2 record. Doubles are led by the team of Berner and freshman Tiffany Bost, with a 3-0 record.

The girls started out with a landslide victory over Buena Vista University, 8-1, but lost to Grinnell College and Graceland University, both by scores of 7-2. They hope to pick the winning streak back up, while having a lot of fun, too. Their next home meet is Sept. 19 against William Jewell College at 9 a.m.