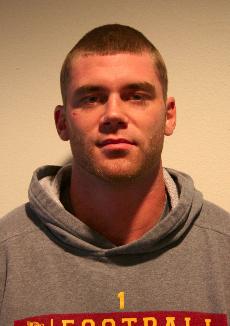 Todd Blythe set the record for the most touchdown receptions as a Cyclone at Iowa State. Now he’s dawning the red and gold at Simpson as he works toward his goal of becoming a teacher and coach.

He played wide receiver at Iowa State for five years, redshirting his first year. After graduating, he played for the New Orleans Saints. After six months, he was released and signed with the Canadian Football League. While playing in the CFL this June, he suffered a career-ending ankle injury. That’s when he decided to come Simpson.

It was an easy choice for Blythe when deciding where to continue his education.

“They have a great teacher education program,” Blythe said. “And it’s a school I’m very familiar with from growing up in Indianola.”

Blythe already has a Bachelor of Arts degree from Iowa State. Now he is working on his teaching endorsement.

“Right now my main goal is to do as well as possible and get through the next two years so I can start my career as a teacher,” Blythe said.

Blythe has been a football player for as long as he can remember and is still getting used to life without practices and meetings everyday.

“I have tons of great memories, but my favorites would probably be all the stuff behind closed doors in the locker room that people don’t get to see,” Blythe said. “From (former) Coach (Dan) McCarney dancing after a big win to the never-ending practical jokes that take place when you see the same group of guys from five-to-six hours a day, everyday.”

Before every game, Blythe would write the bible verse Mark 9:23 on one glove and the initials of all of his family members on the other.

He said he agrees with Iowa State’s decision to hire Paul Rhoads as the new head coach,

“I think Rhoads is a great hire,” Blythe said. “He understands what it takes to recruit and win at Iowa State, and he reminds me a lot of Coach McCarney.”

Although attending Simpson was an easy choice for Blythe, before going to Iowa State he also looked at the University of Iowa and Kansas State University.

Blythe said of his decision, “I developed a great relationship with the entire coaching staff at ISU through the recruiting process, and it just felt like home to me every time I was up for a game or a visit.”

Blythe loved being a Cyclone but is a big Storm fan too. He said that it’s a lot different from what he is used to but likes walking into a class of 20 instead of 300. He also likes being able to walk to a class without getting stopped constantly for football talk or a quick picture.

Fifth-year senior Tyson Unkrich, the current quarterback for the Storm who also redshirted in football at Iowa State, can relate to making the transition from a large university to Simpson .

“My experience at Simpson has been different in many ways from Iowa State,” Unkrich said. “One of the biggest differences I believe is that it is easier for students to be more involved with campus life and get to know more people at a smaller school.”