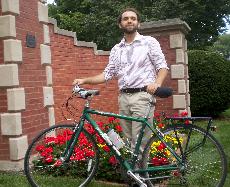 Battling less than desirable weather conditions, junior Louis Sachs rode his bicycle from the suburbs of Chicago to Simpson College this summer before classes began for the 2009-2010 academic school year.

The music education and history double major had always wanted to ride the distance back to Indianola and felt this was the perfect opportunity.

“I figured now would be a good time, especially considering my dad was reluctant to make the drive back to Iowa,” Sachs said. “He doesn’t always like to fight rush hour traffic.”

Some of Sachs’ friends gave him other alternatives on how he could get back to campus.

“I suggested alternatives like taking a bus to Des Moines and getting picked up there, but he was dead set on it,” junior Aliese Hoesel said. “Louis doesn’t change his mind once it’s set, so there’s nothing anyone could have said to dissuade him.”

After listening to his friends’ and family’s advice, Sachs began his journey in the early morning hours on his first day of the trip. He rode on a train to Elburn, Ill., a suburb of Chicago, and then biked 110 miles to Clinton, Iowa.

According to Sachs, the first day was extremely hot and tiresome.

“Up to that point, I hadn’t ridden over 60 miles a day in the summertime,” Sachs said. “The added weight from my clothes and belongings I was taking to school didn’t help any.”

On his second day traveling from Clinton to Mount Vernon, Sachs had trouble staying dry on the 65 mile leg of the ride because of rain.

Although the skies were not in his favor that day, Sachs was able to get a good work out.

“Even after a four hour (rain) shower, I was still sweating,” Sachs said.

Sophomore Megan Cox had Sachs stay with her in Mount Vernon that night after he rode into town.

Delayed a day because of thunderstorms and flash flood predictions, Sachs had to wait before making the final and longest stretch of his trip to Indianola.

“Even though I was tired, I started that morning so pumped up,” Sachs said. “When I got to my dorm room after riding 125 miles, I still felt like I could keep going.”

Despite the heat and rain, Sachs’ overall experience biking to Simpson was a positive one.

“I would definitely like to bike from Chicago to Simpson again,` although I’m not sure when I would because the breaks aren’t long enough,” Sachs said.

Although the trip could be seen as daunting to accomplish, Sachs is no amateur to bike riding.

A few years ago, he rode the 500-mile journey from Chicago to the Twin Cities. “I just did it for the hell of it,” Sachs said. “I wanted to go and I didn’t have a car.”

In the past, Sachs has used many methods of transportation to get from his hometown to campus.