Storm takes to the airwaves 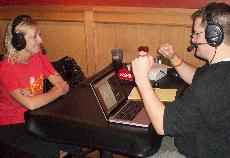 Can’t make it out to support Simpson College Storm football this weekend or any other time? Now you can get live coverage of the game on 105.3 KEDB-FM.

KEDB, also known as Iowa’s True Oldies Channel, is now broadcasting Simpson athletic events. The station also hosts a Simpson coach’s show every Monday night. Listeners can catch the show at 7 p.m. or on the station’s Web site at www.kedb.fm. Radio station owner Edwin Brand says the online broadcasting has been successful so far, with a couple hundred listeners.

Games used to be broadcast through only the local campus station and online. The new station covers half of Des Moines and parts of Northern Missouri.

The radio station offers a lot of opportunity for a number of people. It provides a commentary for those that can’t make it to the sporting events. It involves students and staff from Simpson College. This gives students hands-on experience in radio broadcast. It also gives coaches a chance to be heard and to put out their opinions and game plans.

Brand is very excited about the station as well as the student involvement.

“I told (Athletic Director John) Sirianni that I wanted some type of outlet for the kids to be on a real station,” Brand said. “It also gives the campus a good place for recruitment and to better students’ futures.”

Brand bought the station in January 2008 in the hopes of getting students involved and broadcasting games to a wider audience.

“I went to school here 10 years ago, and I just wanted to get students involved,” Brand said. “It gives them a chance to see a little bit of the real world.”

Senior Quinn Albrecht is one of the students involved with the station. His roommate encouraged him to get involved, and he’s happy he did.

“The station is fun, but there were some problems the first couple weeks,” Albrecht said. “It was hard to get a flow, but things have progressively gotten smoother.”

Albrecht has high expectations for the station as well as for himself. He hopes that working for the radio here will lead him on to bigger, better things in the future. Albrecht hopes to pursue a career with a professional sports team and would also like to be involved in working on game promotions.

Football coach Jim Glogowski has been very impressed with the station.

The station also offers athletes a chance to share how their teams are doing and what they would like to see happen during the season.

The station is currently broadcasting all football games, both home and away.

Throughout the year, they will also provide coverage of select men’s and women’s basketball games.

Coverage may also include baseball games.

“I feel that many families will appreciate the stations play-by-play coverage,” senior linebacker Cody Jensen said.