Homecoming 2009 Preview-The Good, The Bad, and The Ugly 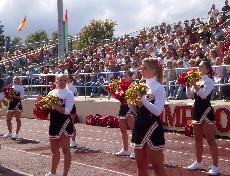 Ready for The Good, The Bad, and The Ugly? It’s almost that time of year again-homecoming week at Simpson College.

It begins on Monday with a kick-off bonfire and ends on Saturday night with the piano palooza and the announcement of the spirit awards and homecoming trophy.

The announcing of homecoming royalty will take place at the Yell Like Hell competition on Friday. Sophomore Tyson Wirtz, co-chair of homecoming activities, said he is looking forward to seeing his fellow students having fun at every event that he and co-chair Kayla Vanderhorst have planned.

This year’s homecoming schedule looks a little different than in years past though. Several events have been replaced by activities that Vanderhorst and Wirtz hope students will find exciting.

Wirtz said the reason for these changes was that there was not enough interest in the skits or the Olympics last year.

“We found that dodgeball is a better way for more people to get involved and for non-Greeks to start teams,” Wirtz said.

Sophomore Jessica Fox said that her favorite part about homecoming week is Yell like Hell.

Freshman Cassie Bardole said she is also excited for the Yell like Hell competition. Bardole is participating with her basketball team.

“The football game is really what it’s about though,” Bardole said.

The football game against IIAC-rival Central College of Pella is one of several sporting events taking place next week. Students are encouraged to go out and show their support to the student athletes and coaches.

“All of these events are meant to boost school spirit,” Wirtz said. “We are encouraging people to go to all of the sporting events and cheer loud.”

Prizes will be given out to students who show exceptional amounts of spirit at the events.

Sophomore Jennie Darrow said that the football game is her favorite part of homecoming week.

“I like the excitement of the game on homecoming,” Darrow said.

Wirtz said that every event of homecoming week is exciting, but the sporting events are the highlights of the week.

“They are the purpose of homecoming,” Wirtz said.

Nominations for homecoming court have already been taken online and the results will be announced on Saturday, October 10.

Wirtz said he hopes to see a lot of students participate and have a good time during Homecoming.

“I encourage everyone to get involved,” he said. “Homecoming week is much more fun when you get involved in events that are sponsored.”