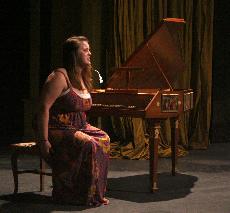 The Simpson Music Department presents their fall opera, Mozart’s “Le Nozze di Figaro” (The Marriage of Figaro). Though originally written in Italian, the cast will perform the opera in English in Pote Theatre on Oct. 16, 17 and 18. With 13 lead parts and a chorus memorizing and performing 481 pages of music, “The Marriage of Figaro” has been a department-wide-project for the first half of the fall semester.

Bruce Brown, assistant professor of music, and Cara Chowning, visiting instructor of music from the Cleveland Institute of Music, have taken over as Simpson’s fall opera team. Music Professor Robert Larsen, director of past Simpson operas, is currently on sabbatical.

Brown is working as stage director and Chowning as music director.

Senior Chris Carr plays Count Almaviva, the greedy count whose quest to have sexual relations with his personal servant’s fiancé and postpone their marriage fuels the plot. Carr said that though different from past years, he has enjoyed working with the new directors of this year’s opera.

“It is fun to work with both of them because they have a lot of experience and are both just very fun people,” Carr said.

Brown performed “The Marriage of Figaro” as a vocal performer many times during his career and has enjoyed watching his students learn the opera he has grown to love.

“The growth that many of the performers have demonstrated on stage is one of the most rewarding aspects for me as a teacher and director,” Brown said.

Brown said that this opera was chosen because of the size of its cast and because of its popularity in history and its relevance to today.

“It is one of the most popular comedies in the operatic repertoire and stands out as a masterpiece from the Classical Period,” Brown said.

Though the opera was written many centuries ago, the cast believes it still has relevance today as a great art form that everyone should be exposed to in their lifetime.

“This show was written in 1786, but I dare you to go to that show and not find it funny,” Carr said.

Carr said that he has grown leaps and bounds as a vocalist because of the difficulty of this opera. He said that since the show is triple cast – three people to each part with the exception of the two male leads – he has learned how to pace himself and save his voice for long practices.

Junior Bethany Hickman, who plays Cherubino, said she believes this opera has helped her immensely as a performer.

“I think we’re all growing a lot as performers and musicians because of this show,” Hickman said.

Since Cherubino is a male, Hickman has also learned a lot about character development.

“Obviously there’s a huge difference between being a girl and then playing a boy on stage,” Hickman said. “Everything from the way you walk to how you react has to be convincing enough for the audience to forget your gender and really appreciate the opera as a whole.”

Chowning said this opera is a challenging blend of acting and vocalizing.

“Personally, I am looking forward to seeing the piece come together as a whole in performance and to see and hear the growth that each of the student performers has made throughout the process of working on this great opera,” Chowning said.

The directors and the cast encourage Simpson staff and students to come and support the music department by attending one of the performances.

“It’s incredibly entertaining and it’s a wonderful display of the talent we have at Simpson,” Hickman said.