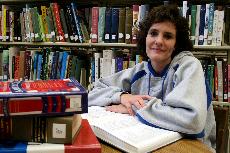 Although Simpson College hasn’t kept track of the numbers of first generation students in the past who are the first in their family to attend college, they will be soon according to Wendy Robinson, director of Student Support Services.

“We are asking that on admissions applications now, starting this year,” Robinson said. “Based on information we get from the FAFSA, Simpson usually has several hundred first generation students enrolled full-time per year.”

DeWit is a non-traditional student who made the decision to go to college when her oldest son challenged her to do so while they were on a junior college visit for him.

“He was looking at a physical therapy program and was talking about how hard it would be,” DeWit said. “I told him all he would have to do is be committed and work had and he said, ‘Right, I’d like to see you do it.’ So, I got to thinking and realized that if I wanted to stress the importance of college, I should probably set a good example.”

DeWit is now a political science student, wife and mother of six. She started her college career at William Penn University, but transferred to Simpson because of its political science department’s positive reputation.

Prior to coming to college, DeWit graduated from high school in North Platte, Neb., at midterm and got married. She then moved to North Carolina with her husband who was stationed there as part of the Marine Corps. After that, she and her husband started a family, and she became a full time stay-at-home mom. Now, she hopes that her going to college will influence her children.

The college has gone to great lengths to help first generation students like DeWit.

“Simpson awarded me an honors scholarship which paid for a substantial amount of my tuition,” DeWit said. “That obviously helps a lot.”

Robinson said that students must apply to be members of Student Support Services.

“I (…) think that parents are becoming much more insistent that their children at least consider college because they know how difficult it is to earn a living without a college degree,” Bolen said.

Bolen also believes that today’s students realize the monetary benefits that come along with having degree.

“Personally, I think the whole range of jobs and careers are changing such that it is becoming increasingly difficult to support oneself and a family in the kind of job that does not require a college degree,” Bolen said. “I think young people are becoming aware of the fact that they cannot earn the kind of money they want to live the way they would like to live without a college degree.”

Part Two in the three-part “Breaking the Mold” series will feature students who are currently or have previously served as members of the armed forces.