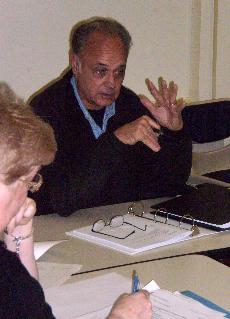 Simpson College is clearing the way to becoming a more eco-friendly campus and participating in the American College and University Presidents’ Climate Commitment (ACUPCC) is one factor in achieving that goal.

President John Byrd signed on to the ACUPCC last fall. In doing so, he pledged to help neutralize Simpson’s greenhouse gas emissions.

One of the most recent steps was to submit the President’s climate action plan last month.

According to Simpson’s action plan, each student produces 11.2 metric tons of carbon emissions per year. The President’s commitment says Simpson will one day be carbon neutral, making carbon emissions zero.

“Simpson is absolutely capable of achieving the President’s commitment,” Steve Griffith, vice president and dean for Academic Affairs, said. “The issue is time frame. How fast can we achieve our goals? A lot of it is becoming more educated on energy efficiency.”

The major goals for the Presidents’ Climate Commitment will be placed in a more detailed action plan that must be submitted by to the program administrators by Sept. 15, 2010. These goals will be created and worked on by the Sustainability Committee.

“Setting the Goals for GHG reduction will be the focus of the Sustainability Steering Committee and the Sustainability Committee for this school year,” Jerry Kelley, Mayor of Indianola and executive assistant to the President, said. “We know the categories and we know where we now stand. Figuring ways to track, reduce and review our efforts is the major function this year.”

Many improvements have been made already on the campus in regard to energy efficiency, including motion-censored lights, geothermal heat pumps, low-flow toilets, lower-watt lighting and an expanded recycling program.

These improvements are already changing the results of the climate action plan submitted last month and are pleasing members of the Sustainability Committee.

“Think about the number of motion-censored lights going into classrooms now that were not there a few years ago, or the low flow toilets and low flow shower heads,” Kelley said. “Just in the Clinton apartments, the low-flows save 10,000 gallons of water.”

Kelley also emphasized the need for students to commit to the pledge.

“It’s going to require significant student body participation at some point,” Kelley said. “It’s a commitment on the part of the student body to recycle, to reuse, to measure, to keep track, to reduce, because it all counts.”

“I feel that as a community, we have a long way to go before the President’s Climate Commitment is achieved, but social change never comes easily,” Shelton said. “It is a difficult and time consuming process for change to occur. The only thing that we can do is take things one project at a time and do all that we can to achieve our goals.”

Both Griffith and Kelley expressed their excitement for the Earth Corps Scholarship Program. Put in place last year by the Sustainability Committee, the program attempts to bring students to Simpson and award students for their interest in the environment and sustainability.

According to Griffith, the Earth Corps Scholarship program is an effort to attract students with a specific interest in helping the environment.

“The students have a commitment to put in volunteer hours to improve our sustainability efforts along with other things,” Griffith said. “We would like to expand it to learning about issues in class. We want to make sure it has an educational component.”

Kelley added that someday he believes the Earth Corps should be expanded to include many more students.

“There are four students in Earth Corps now,” Kelley said. We would like Earth Corps to be 150-200 students. Much like other colleges have leadership as a core part to admission to college, we think that Earth Corps, the commitment to the environment, should be the core value for Simpson College and that we would like to see hundreds of students involved in that.”

Kelley also mentioned the EAC, saying he admired their passion. Shelton had mutual feelings for the Sustainability Committee and recognized the Committee’s role in the success of EAC.

“The Sustainability Committee has also played an integral role in the successes that we have had as a club instituting change thus far,” Shelton said. “Without the power and resources that the Sustainability Committee has, we would also be struggling to meet our goals. It takes a team effort from students, faculty, staff and administrators to make these sustainable changes work.”

Simpson was one of the 12 colleges and universities out of 49 in Iowa to submit their summary last month. This alone is a feat. Now, Kelley says we need to put the information to good use, move forward and “make it happen!”