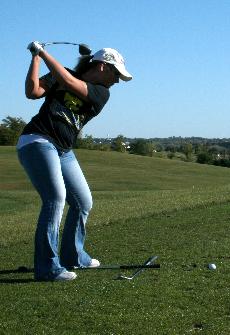 It’s a hole in one on a rather chilly weekend for the Simpson College women’s golf team as they take third place out of eight teams at the IIAC Women’s Golf Championship.

Coach Bob Darrah had both high hopes and expectations for the team to place as high as they could in the tournament, and the women met them well.

“So far this season, we have been in the upward half of our conference,” Darrah said. Before the tournament, Darrah said he’d hoped the team would finish third or better.

The ladies met this challenge and had three teammates place in the top ten. Seniors Katie Vaux and Megan Smith took sixth and eighth place respectively along with sophomore Taylor Hillery, who came in ninth.

“The team is strong, especially with our two seniors Smith and Vaux,” Darrah said. “They participated in the national tournament as freshmen and are currently three (now four)- time All-Conference. Taylor Hillery has been a pleasant surprise this year.”

Vaux has been very impressed with the team thus far this season, especially this past weekend.

“Our expectations for (the) weekend (were) to just take off a few strokes of our own scores and work on a personal best team score since we didn’t play as well as we should have (Sept. 25 and 26) at Pheasant Ridge in Cedar Falls,” Vaux said.

Vaux said that the team has participated in some challenging tournaments this year, but they have all kept their heads up and practiced hard.

This hard work and dedication has led to some great accomplishments for the women’s golf team. They have shown some overall great team scores as well as individual success.

Senior Megan Smith also was prepared for good things to come from the team, and she was impressed with the results from the weekend.

“Our team is very experienced,” Smith said. “We didn’t play any freshmen and we didn’t graduate anyone last year, so all our players knew every course we played. That is a huge advantage for any team.”

Although she would have liked to have seen the team win the tournament overall, it was nice to finish third.

This was a step up from last year, when the team placed fourth. Smith also had a lot of good things to say about the season all together.