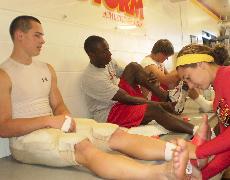 Yet another infectious scare has Simpson campus on alert. Six Simpson football players have been diagnosed with MRSA (methicillin-resistant Staphylococcus aureus), a type of staph infection.

“We intend to take this situation very seriously,” Athletic Director John Sirianni said. “We have worked closely with the necessary people, developed a plan, and we are taking immediate action to stop the spread of this infection. The kids’ health is our number one concern.”

MRSA is particularly more dangerous than other types of staph infections because of its resistance to antibiotics, including methicillin, oxacillin, penicillin and amoxicillin.

According to the Iowa Department of Public Health, the infection can be fatal. Symptoms include a boil or rash, as well as swelling and warmth surrounding the infected area.

“We want the student-athletes to be aware of their hygiene, how to take care of themselves, but most importantly, how dangerous this infection is,” Sirianni said.

“The only way to spread MRSA from person-to-person is by way of entry,” Audlehelm said. “A person with an open wound who comes into close contact with another individual with an abrasion is how this outbreak can be spread.”

To counter reports across campus that using the weight room spreads the infection, Audlehelm stressed that close contact is the only way a student can receive MRSA.

“Use of the weight room is irrelevant to catching the infection,” Audlehelm said.

“Students should not be scared,” Hadden said. “The staff in the weight room cleans the equipment on a consistent basis. Also, the athletes know better than to use unclean equipment during this outbreak.”

The Iowa Department of Public Health has released a checklist for school athletic programs to follow in certain situations, such as the one Simpson officials and students are currently battling. One area the IDPH stresses is the weight room. The IDPH recommends using hand sanitizers and cleaning equipment in a weight room setting.

In addition, the checklist consists of six major divisions, including techniques to disinfect locker rooms and what coaches and athletes need to do. For example, athletes are instructed to report any skin abrasions, wounds or skin infections to a coach, trainer or school nurse. The checklist also recommends that athletes shower immediately after any athletic activities.

According to Hadden, students should not be afraid because awareness is being spread throughout the Athletic Department.

“Many e-mails and phone calls have been spread, parents have been notified, and coaches have discussed the issue through the checklist,” Hadden said.

Sophomore Grant Grodahl thought he was one of the healthiest members of the Storm football squad. When he woke up on Sept.18, however, he felt a small bump on his elbow.

“At first, I thought it was a general bump,” Grodahl said. “Then it started to swell up and become nasty, and that’s when I knew it was a problem.”

Grodahl thinks he got MRSA from the locker room, but he is not positive how he caught the infection.

He has to keep his elbow covered at all times, make daily checkups with the training staff and take antibiotics.

“At first, I thought, ‘Why did this happen to me?’ but now I realize how dangerous MRSA is to our team,” Grodahl said.

Grodahl, a defensive end, hopes to return to the football field within two weeks.

According to Sirianni, there is no timetable as to when MRSA will no longer be an issue on campus.

“It is a concern, but we are doing everything we can to prevent this from becoming more severe,” Sirianni said. “Mike (Hadden) and Rita (Audlehelm) are doing a tremendous job.”