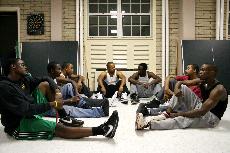 You may have seen them at Yell Like Hell, on YouTube or even Facebook. Broke Fi Broke is a highly talked about stomp group that originated here at Simpson College.

According to senior Coy Carter, the original group was made up of mostly football players with one basketball player.

Broke Fi Broke first appeared on campus three years ago at Yell Like Hell. Since then, they have performed at an Up ‘Till Dawn Letter Writing Party as well as several talent shows.

“We found out about a step competition that was held every year, but it supposedly was open to only Greek members,” Carter said. “After finding out we could enter, we really wanted to go and showcase our talents and somewhat make a mockery of the fact that this competition was not open to non-Greek students. So we created the fraternity Broke Fi Broke.”

Those who want to join the group first have to showcase their talent.

“Recruiting members is not as easy as it looks,” Carter said. “We try to plan our routines around the number of people we have. Not only that, we look for those who are willing to put in the work, because it’s definitely a grind.”

After seeing one of their performances many Simpson students eagerly wait to see their next performance.

“I was in shock the first time I saw Broke Fi Broke perform,” senior Taylor Browning said. “Those guys obviously work very hard every year to put on such a good show, and the eye-candy is a plus.”

Many people around campus know about Broke Fi Broke, but according to Ramsey, the true meaning is usually overlooked.

“The meaning is in a living definition, kind of like ATO, or SAE, the letters themselves mean absolutely nothing, it’s every single one of us members that give definition to Broke Fi Broke,” Ramsey said. “The concept came from Kanye West’s debut album, ‘College Dropout.'”

Broke Fi Broke’s next appearance will be at Yell Like Hell on Friday night.

“It’s going to be crazy, but that’s all I can say at this point,” Ramsey said. “You just have to come and see.”