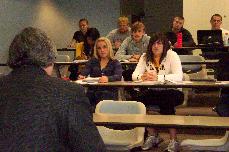 A newly established scholarship, slated to go into effect next fall, is the first step in a new program being planned at Simpson College.

“We hope to give three to five a year,” John Epperson, professor of political science and chair of the division of Policy Studies, said. “This first year, because we started a little late in the recruitment process, we’d be happy if we got three for next year.”

Although some details, such as the exact monetary award, are still being determined, Epperson said a few parts of the scholarship have been decided.

“There will be some opportunities for research projects, conferences and internships,” Epperson said.

While the scholarship has an emphasis on public policy, students of all majors can receive it.

“Given how defined it is, majors like political science and history will be the ones where a lot of the students will go,” Epperson said. “Public service can occur in a wide variety of majors, so it’s not designed for any particular major. I think some more easily fit into it than others do.”

The John C. Culver Fellowship was created with the help of several alumni who knew the Senator personally.

“It’s part of a larger effort, which we hope to announce more details about in January,” Epperson said. “Some alumni of ours came forward, who knew Sen. Culver, and they said he was interested in starting a sort of center that would pursue some of these civic engagement and public policy goals. One part of it is the scholarship.”

More information about the project is set to be revealed later this school year, when more details are worked out and funding is received. Epperson said that he hopes the new project will accomplish many tasks. One of those is reaching out to all students.

“We hope to provide, in a variety of ways, enhanced opportunities for our students, not just those who receive the fellowship, but others as well,” Epperson said. “There will be other things that we’ll eventually be doing connected to the fellowship that will benefit the entire student body.”

Epperson also said that the goal is to have an impact on not just Simpson, but the entire country.

“It’s not just about educating our students,” Epperson said. “It’s also about improving the nature of our communities, whether it’s Indianola or central Iowa, or Iowa, or the nation. I think this will help us do that in several different ways.”

Senior Sara Kirsch, a political science major, said she thinks the fellowship will help people in her major.

“I hope it can really provide more avenues for political engagement,” Kirsch said. “When I tell people what my major is, I get negative reactions. People need to realize if you want things to change, you need to have as say.”

Sophomore Mick Wise said he believes the fellowship will help Simpson as a school as well.

“It would improve the number of students Simpson gets because it’s important for (political science) majors,” Wise said. “Any money anyone gets from any scholarships will help them come to Simpson.”

Epperson hopes that one day this program will be one that not only helps students but becomes something people will talk about for years.

“I think it will enhance and strengthen the reputation of the college if we do this right,” he said. “Hopefully in a number of years, this will be a program that people are talking about.”