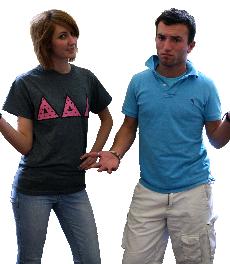 Well my dear, seeing as you really don’t know what’s going on I suggest not going to the girlfriend right away. Maybe they’re just study buddies for anatomy and like hands on experience rather than boring books and notes.

If there is something going on and the girlfriend has no clue, then I think we’re all okay. Ignorance is bliss sometimes, and I think this is one of those situations. If your friend is happy switch hitting and playing around and the girlfriend is in her own happy little world where she thinks she’s the only one for him, let her think that.

It’s like the episode of “Will and Grace” when Grace discovers Will’s parents are sleeping with other people, and she tries to fix the situation. Will confronts his parents and it causes all sorts of problems when really, both parents knew what was going on and they were totally happy. Bringing it into the open just made things awkward.

So, I suggest not saying anything.

You can’t just come out (no pun intended) and ask him if he’s gay. That will cause problems. You need to think of a way to tactfully approach the situation and let him know that you are okay with the gay community and if he happens to be a member that it just fine with you. Or maybe he’s just experimenting and trying new things. After all, we’re supposed to be getting a well-rounded liberal arts education, and it looks like he just took that to the love life too.

So really, I say shut up and don’t worry about it. For one, you have no clue what’s going on, and it appears that everyone’s happy. Everyone’s getting a little action and we’re all good. Go about your life, let your friend do his thing and we can all have a happy ending.

In a word: no. Look, if you’re not 100 percent sure that these two are cheating, stay out of it. If I found out for sure that one of my best friends was dating a sleazy cheating ass, of course I’d want her to know. But it sounds like you’re more of an acquaintance than a friend, and even if you are super close with the girlfriend, the last thing you want to do is create drama in her relationship when nothing is going on.

All relationships are complicated. He may just need another woman’s perspective on things. Or, maybe he goes to her because he’s unhappy in his relationship and wants to get some from someone else. But if you aren’t sure, you’re going to cause unnecessary drama and look like a huge jerk. No one likes a gossip, after all.

In short, this is really none of your business unless you’re concerned about your friend, because your loyalties should lie with him. Perhaps things aren’t working out, and maybe he could use someone to talk to about it. Ask him what’s going on and if there’s anything you can do to help. If you do get confirmation or catch them in the act, the best thing you can do is talk to your friend, not his girlfriend.

I’m not condoning cheating, but it happens. It happens because nobody’s perfect and sometimes things just don’t work out. If a person is attracted to someone, it’s human nature to act on it, and if he wants something else, he shouldn’t have to settle and stay in a miserable, crappy relationship. She should be with someone who wants to be with her and who isn’t going to sneak around. But everybody has to make their own mistakes so they can learn from them and figure out what they want. In this case, tell your friend you think he messed up and that he owes it to his girlfriend to let her know.

Again, this could all just be a huge misunderstanding and what they are doing might be innocent after all. If you really feel that you just have to know what’s going on, talk to your friend and clear the air, and give him advice if he needs it. Then he and his girlfriend can work things out themselves if there’s something wrong. That way, they can keep their problems between the two of them-the way it should be-and you can butt out.