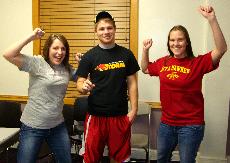 A Tigerhawk tattoo on the bicep of a tailgater grilling outside of Kinnick Stadium. A bold face painted bright red and gold headed to cheer on the Cyclones. A brand new car proudly displaying Simpson College Storm license plates. College football brings many kinds of fans to the surface.

“Fair-weather fans drive me nuts,” junior Blake Shultice, an Iowa State fan, said. “Even though it can be painful after years of not-so-good teams, I stick with it. It will only make it that much sweeter when they do have a successful season. When Iowa State isn’t doing so hot, most fans tend to reminisce about the glory days – Seneca Wallace in football, Jamaal Tinsley and Marcus Fizer in basketball. That helps us cope with the current pain.”

“If the Hawks suffer during the season, I suffer with them,” Nelson said. “You’re not a true fan if you hop from one good team to the next year after year.”

No matter how bad of a season, or decade, a team is having, true fans stick by them. But how do those die-hards decide which team to cheer for?

A few factors usually play a role when deciding which college football team to cheer for. A majority of the time, it’s a family thing.

Many fans state that they were “born Hawkeyes” or “born to cheer for the Cyclones.” To become fans of another team would be out of the question, a letdown to the family.

Others become fans by association.

“My dad and family have started to pay attention to the Storm,” junior Amy Brandt said. “They do it because I’m here, and they want to keep up with my college.”

Fans on campus admitted reasons as to why they cheer for certain colleges.

Friends are a major factor as well as significant others: a girlfriend who cheers for Simpson, a boyfriend that won’t miss a Cyclone football game for anything or a best friend who wakes up at 5 a.m. to tailgate with hundreds of other Hawkeye fans. If you can’t beat them, you might as well join them.

Many people have more than just one reason for why their football team is their pride and joy.

“Both of my parents and two of my grandparents went to Iowa State,” Shultice said. “We also lived about 15 miles from Ames for about 10 years, so that played a role, too.”

Quite a few fans say they identify with their college team because of proximity.

If a fan lives close to the college town, they have the option of being able to go to the football games more frequently and soak up the hype that goes along with a big win.

“You can tell when the Storm wins a football game,” Brandt said. “Campus feels as if they have something to celebrate about.”

No matter how someone becomes a fan, it becomes a part of them.

For those die-hards, it’s more than just a game. It’s life.