A Storm to be scared of 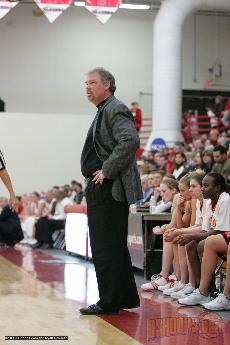 At Simpson College, many students live, breathe and participate in athletics. So whenever Storm sports are brought up, women’s basketball often has ended up in the conversation. A look at their past success, shows why Storm basketball is so popular.

“The primary reason I came to Simpson was because of the women’s basketball program,” senior guard Alicia Fischer said. “Being able to play for Coach Niemuth and to be a part of a program with such a good reputation made coming to Simpson a very easy decision.”

After 22 years at Simpson, Coach Brian Niemuth has definitely become a main factor in the team’s accomplishments. Since the beginning of the 1997-1998 season only one women’s basketball team in the state in any division has won more games than teams coached by Niemuth, Iowa State. He has won more than 300 games in his coaching career at Simpson, is ranked 31st in wins, 37th in all-time victories and 50th in all-time winning percentage among all active Division III coaches across the nation. Niemuth was named IIAC Coach of the Year for the fourth time and Women’s Basketball Coaches Association District 8 Coach of the Year for the third time in 2008. He has more wins than any other coach in the history of Simspon’s women’s basketball.

“Coach Niemuth and our coaching staff won’t allow anything less than the best from each of the players and strive to improve the players both as a team and individually,” senior guard Emily Smith said.

Niemuth said the athletes are another key to success.

“The quality student-athlete we get sets us apart,” Niemuth said. “We have to have players that have talent but work hard. They can’t be selfish. If they have those three things, it allows you to be successful.”

Niemuth believes that the players can’t be worried about individual playing time or stats. They have to be concerned with the team and how well they play together.

“The expectations and standards that are set for the players exceeds any other program in the conference and rivals any in the country,” Smith said.

The women’s team has been 244-64 in the last 11 years. They have won six Iowa Conference Championships and four Iowa Conference Tournament Championships. Since 1983, they’ve gone on to the NCAA Division III National Tournament nine times, and last year marked their fifth consecutive appearance in the Sweet 16 tournament. They lost in the tournament last year to UW-Whitewater with a score of 69-59.

“I think that we have the potential to be a great team and make it back to the Sweet 16 as long as we work hard everyday to get better, play as a team and every person fulfills their role on the team to the best of her ability,” Fischer said.

While Niemuth doesn’t think that all of the Storm’s past success is an unwanted pressure on the women’s basketball players, he takes it upon himself to keep the achievement level where it is. Instead of pressuring the team, he thinks it motivates them.

“They don’t want to be the first group that hasn’t been successful,” Niemuth said.