Storm hope to send football seniors out with a win 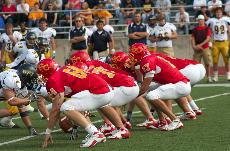 With one game remaining, Simpson College Storm football is looking to go out on a positive note.

The Storm (3-6) rested on a bye last week and will take on Wartburg in Waverly Nov. 14 in the final game of the season.

“We certainly have gotten better as the year has gone on,” Coach Jim Glogowski said. “We’ve had a lot to overcome and to the kids’ credit, they have. They’re are still upbeat and working hard.”

The Storm is coming off a conference win against Cornell on Oct. 31, 17-16. Trailing at halftime, they were able to take the lead on a 73-yard touchdown run by junior tailback Jake Rissi.

It was Rissi’s first start at tailback. He came into camp as a tight end, but has spent much of the year at fullback.

“I just paid attention during camp when we watched film together with the offense,” Rissi said. “When Matt (Claassen) and Renauld (Shelton) went down, I was ready to step in.”

The 73-yard run is the longest play from scrimmage this season in the Iowa Conference and tied the third longest run in Simpson history.

“It was all blocking downfield,” Rissi said of the run. “Tight end Max Williams blocked three different guys downfield for me.”

The win at home gave Simpson a 3-2 record at Buxton Stadium. Rissi finished with 131 yards and one touchdown.

Ideally, the bye week would come in the middle of the season. This year, it came with one game left. Simpson was able to focus for two weeks on Wartburg, in hopes of closing the season with a win.

“We’re still working hard to win the last game for the seniors,” junior defensive back Gabe Gilson said. “We want to send them out on a high note, especially after the year we’ve had.”

After starting the season 2-2, the Storm dropped four straight. Cornell could have been an opportunity to fold the tents for the remaining two games.

Instead, Simpson chose to continue working to improve and pulled out the impressive come-from-behind win.

“The guys are having a good time and still enjoy coming to practice,” Gilson said. “Give the credit to the coaches for staying upbeat. They let us look forward to the next game, the next opponent.”

Keeping things in perspective is important for Glogowski and the rest of the team.

“Nobody wants to go out there and lose,” Glogowski said. “It just happens sometimes and it’s how you respond that matters. Our coaches have done a nice job of not being negative.”

Twenty seniors will suit up for the Red and Gold for the last time Saturday.

Getting a win at Wartburg would be a great way to close out their careers and boost confidence in the players returning next year.

“A win on Saturday would mean a lot,” Gilson said. “If we beat Wartburg, it would be a big step ahead for our program.”