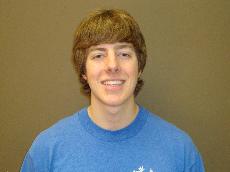 While the diversity of organizations and activities at Simpson College makes getting involved on campus effortless, most students don’t get involved until after their first year. Zach Huebener, however, is not an ordinary freshman.

The pre-engineering student has wasted no time getting acclimated to college life. Huebener has already become involved with the Environmental Awareness Club, Alpha Psi Omega, Math Club, jazz, pep and concert bands, as well as becoming a member of Sigma Alpha Epsilon. And that’s just the beginning for the young man from Ottumwa, Iowa.

His choice to focus on pre-engineering stems from his enthusiasm about the environment. Huebener is proud to describe himself as a “tree-hugging hippie,” and hopes others will share his enthusiasm for the planet.

“My overall goal is to reduce humans’ impact on the environment,” Huebener said.

The environment isn’t the only thing Huebener is passionate about. Huebener says mingling and working with the people; professors and students alike, is his favorite aspect of life at Simpson.

Sophomore Jorie Landers, Huebener’s destination leader, has been very impressed with both his academics and his willingness to get involved.

“Zach is an outstanding student with a personality to match,” Landers said. “He is very dedicated to his activities.”

Though Huebener has more than enough to keep him busy, he does find the rare moment to himself. When that happens, he really enjoys hanging out with his friends, listening to music and reading the Bible.

Huebener has also traveled all over the United States; stopping everywhere from Washington D.C. to Chicago, and he has also taken classes at the University of California Berkley, and enjoyed Boy Scout trips to Minnesota and New Mexico.