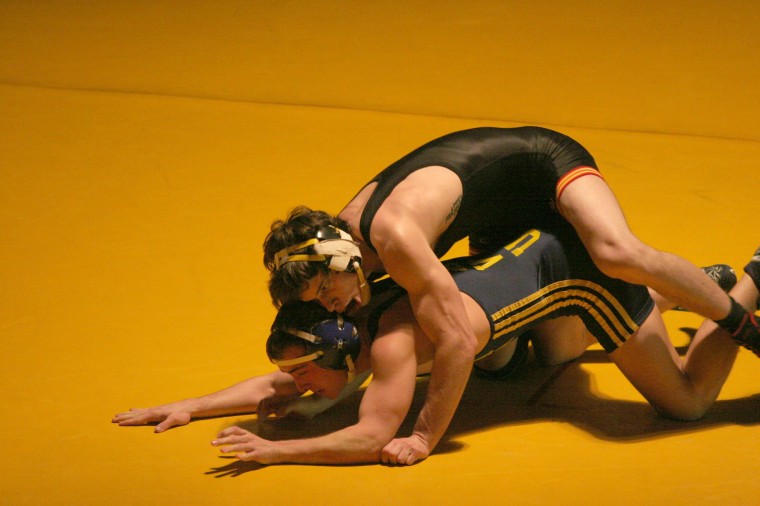 Each year, teams in every sport fight the battle of attrition. Injuries and the loss of players are things every coach must deal with. This year’s Simpson College wrestling team is no different.

“The sport of wrestling is so demanding – physically, mentally and spiritually,” coach Clint Manny said. “You (have) got to find committed kids who can’t live without it. At the

Division III level, you’re doing it because you love it.”

Throughout the year the Storm has lost multiple wrestlers to broken bones and other injuries, as well as numerous athletes in the line-up quitting.

It comes down to finding guys who are hungry for the sport, and accountability for all members of the team, Manny said.

Competing in the Iowa Conference, arguably the top conference in the nation at the Division III level, Simpson wrestlers must learn to take their lumps, while still competing and working hard.

“The season is like a roller coaster, it has its ups and downs,” senior Wade Dowling said. “The toughest thing is getting through the down parts. If you can do that, you’ll be fine.”

Developing mental toughness is required to be a successful wrestler. Manny, in his second year at the helm, preaches the mental aspect of wrestling as much as the physical side.

“Coach expects a lot from us,” Dowling said. “He’s helped a lot, not only technique and conditioning, but the mental side of wrestling.”

As demanding as the sport is, Simpson features wrestlers that Manny speaks highly of and have the drive to compete at this level.

Junior Caleb Brus has been one of the leaders by example for the team. Wrestling at 141 pounds, Brus is focused on his goal of qualifying for nationals.

“I’m not worried about my record,” Brus said. “I’m only focused on the end of the season and being a national qualifier.”

Manny feels Brus has a legitimate shot at qualifying. In order to qualify for the national tournament, one must finish in the top three at the conference tournament or be one of three wild cards selected by the coaches. From there you can become an All-American.

Dowling and senior Curtis Barber also have a great shot at qualifying, Manny said.At this point in the season, the team is focused more on individual performance and effort.

The tournaments and duals prior to the conference tournament will factor into seeding and confidence for each individual.

“It comes down to a couple matches on one day,” Manny said.

Just after New Year’s, Simpson continued a tradition of competing against Williams College in Williamstown, Mass. The two teams alternate hosting duals and tournaments between the schools. It’s developed into a relationship between programs.

“It’s nice to see some different competition and a different style of wrestling,” Brus said.

Looking forward, the Storm is focused on getting two or three wrestlers qualified for nationals and building on the group of guys they have in the program right now. Kasey Green and Jeff Sand are two of the freshmen that Manny sees as having potential.

“The Iowa Conference is so demanding, there really isn’t a learning curve,” Manny said. “I’m looking for core guys who can make an impact right away and buy into the program for four years.”