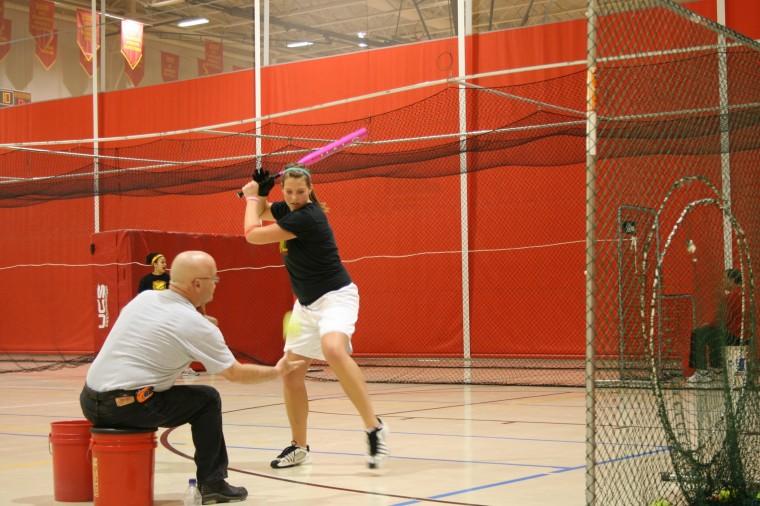 After a successful season last year, the Simpson College softball team is getting things back in gear for another run at Regionals and Nationals.

The 23-member squad headed up by coach Henry Christowski will begin their season in Marquette, Michigan at the Superior Dome at the end of the month.

Leading the way for the team comprised of five seniors is returning two-time All-American left-fielder Kelsie Host. Host, a senior from Altoona, and senior pitcher Whitney Oviatt from Carnation, Wash. are the two returning All-Americans for the Storm. Senior infielder Kortney Proctor from Wilton is a returning All-Conference member along with Host and Oviatt.

Host said she thinks this season’s team has a shot to be very successful.”I would like to go to Nationals but more of a team goal would be to make it to Regionals,” Host said. “If we play our best we could make it.”Fellow senior center fielder Kelsey Castenson, of Harcourt, is also expecting a lot from the team. Castenson has a lot to look forward to after coming off an ankle injury last season.

“As a team, I am really looking forward to seeing where this season takes us,” Castenson said. “We have a lot of chemistry, we all work well together, we are very positive, motivated, and I think things will come together at the right time.”

One obstacle facing the team is the fact that the Storm has limited practice time before games start. Before the first game, the team only has 18 practices together and all of them must take place indoors because of the weather. The team also faces a tough schedule, which includes seven teams ranked in the first National Fastpitch Coaches Association Top 25 poll.

Christowski said it will be a challenging season for the storm because of all these things.

“The expectations are high of course but we probably play in the toughest Conference and Regional in the United States,” Christowski said. “It’s going to come down to who gets a break at the right time and who can get the important wins.”

After the tournament in Michigan, the team will head to Kissimmee, Fla., during spring break for the Rebel Spring Games from March 11-17. This tournament will feature 12 games for the Storm against a lot of tough competition. Due to budgetary issues, the Storm will only be able to take 16 players to Florida instead of the normal 20 they have taken in the past.

When conference games start, the Storm will have to face the returning national runner-up and currently fifth-ranked Coe, as well as a lot of other teams returning top players. Christowski also sees Luther, Central and Wartburg being other teams at the top of the conference.

When it comes to making the national and regional tournament, Christowski knows it has a lot to do with getting hot and playing well when it matters.

“Playing the right ball at the right time helps,” Christowski said. “I wish there was a simple answer but it’s really not simple when there is as much parity in the teams in the conference.”