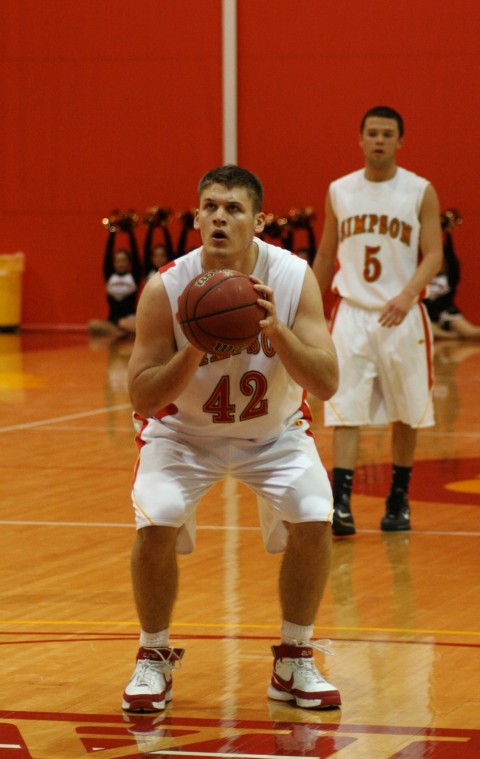 The Simpson College men’s basketball team earned its second consecutive win after losing two players in the second half against Buena Vista University.The Storm (6-17, 3-11 IIAC) defeated the Beavers (12-10, 8-5) 83-80 and hopes to continue its success on into the last two games of the season.”We have won two games now and our goal was to win our last four,” coach Bruce Wilson said. “We can’t get into the tournament, but we can sure finish real strong at the end of the year.”Freshman shooting guard Anthony Miller left the game with a rolled ankle followed by senior forward Andrew Dau who suffered a knee injury in the second half. Not slowing down, the injuries only provided more motivation for the Storm to push for the win.”We really gritted it out there tonight,” Wilson said. “Losing Andrew and losing Anthony, I threw guys out there that have never really played that position. I couldn’t be more proud of our guys. That was a very gutsy win.”Senior center Tim Dunlavy carried the Storm with a career-high 37 points and 17 rebounds.”Tim was our go-to guy,” Wilson said. “We went everything through him and then he made plays for our team.”Even with Dunlavy’s 37 points, the win was a team effort with freshman center Rob King’s 10 points and junior guard Matt Fouch’s nine-point contribution. Sophomore guard Zack Barragan did his part for the Storm adding 11 points, which included a three-point play in the last 14 seconds of the game to seal the win.”It was a little different, because we never really had any injuries this year,” Dunlavy said. “We wanted to come together as a team and support each other.”BVU forward Wes Nordquist led the Beavers with 17 points, followed by four other players in double digits. These numbers simply couldn’t stop the Storm.”Because of Andrew, him being a senior, tonight could be his last game,” Dunlavy said. “We wanted to win it for him.”