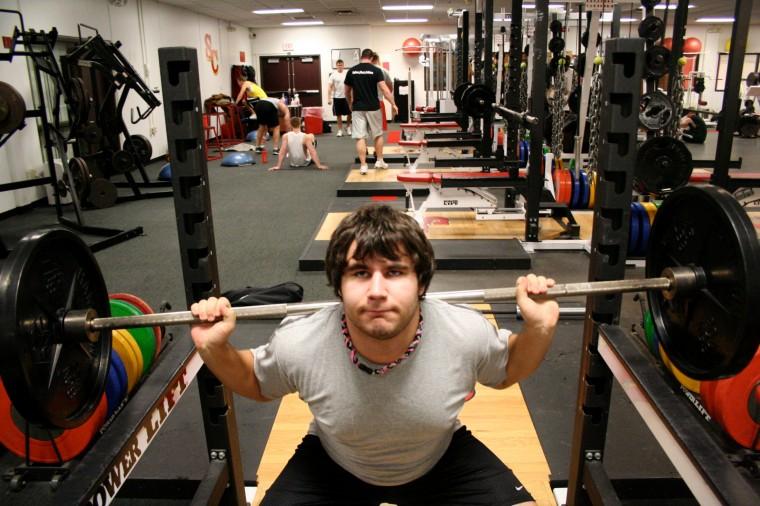 Bigger, faster, stronger. Athletes and teams tend to follow this motto when training, but the Simpson strength and conditioning program knows it’s more than those tangible measurements that make a well-rounded athlete. “Obviously we want them to maximize their potential, and reduce their chance of injury,” Justin Snyder, strength and conditioning coach, said. “But we want them to gain confidence and discipline, build a work ethic and know that to be successful as an individual or a team, it takes hard work over a long period of time.” Snyder has been at the helm of the strength and conditioning program since 2006. Being that there wasn’t a predecessor, Snyder has built the program over the last four and a half years. “Through the community of athletes, it’s built itself,” Snyder said. “They see each other working and notice the results they’ve gotten.”  Each sport requires a different type of workout. By working with the respective coaching staffs, it allows the strength and conditioning coaches to generate sport-specific workouts.  “We have three foundational lifts that we feel are good indicators of an athlete’s overall strength,” Nate Seberg, assistant strength and conditioning coach, said. “Every team will do squats, hang cleans [an Olympic lift that works on hip explosion] and bench press, but we also work with the head coaches to figure out what major areas each sport needs to concentrate on.” For example, football players won’t do all the same lifts as baseball and volleyball players. But each sport will do some of the same lifts, and each team will do certain auxiliary lifts that are specific to that particular sport. The newest sport to the strength and conditioning program is baseball. Until 2008, the baseball team designed their own workouts. “We felt we could do it on our own, but we sat down and figured out what we wanted to do to make things more baseball specific,” baseball coach Ben Blake said. “Now it’s more official and there’s better attendance. The guys are bigger and stronger, and in better shape.” Snyder, Seberg and Blake were in agreement that working hard together in the weight room instills a sense of unity among the team. “When you work that hard together, it means more,” Snyder said. “That hard work cultivates within the team and you build a trust with one another. In team sports, I think that’s huge.” Workouts vary whether a team is in season or not. Inseason, lifting is twice a week for 30-40 minutes at a higher tempo. Offseason workouts are typically three times a week for no more than two hours. “When a team is inseason, the main priority and focus should be on their sport,” Seberg said. “We make sure the workouts are short, but still long enough to get the necessary things done.” Snyder made it clear that the program won’t take responsibility for greatness or mediocrity. It’s up to the athletes themselves to be self-motivated and put in the work. “We know our program works well, and it’s up to the athlete to work hard or not work hard,” Snyder said. “What the athlete becomes or doesn’t become has to do with the choices they make.” From year to year, the message is build and sustain. Continue to build the athletes up and sustain what they have worked to achieve. “Every year it’s getting more and more popular,” Seberg said. “Kids are feeling and seeing the benefits in each other. It’s exciting.”