Airmen to be honored with Carver Medal 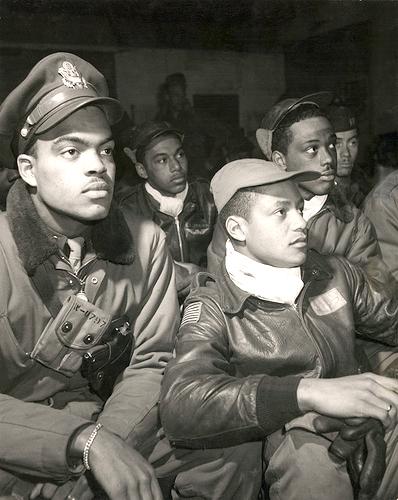 The 36th annual George Washington Carver Lecture is on the horizon. This year’s lecture will honor and decorate the Iowa Tuskegee Airmen on Tuesday, Feb. 23.

Simpson College will hand out the third George Washington Carver medal; 12 of them to be exact.  The medal ceremony was designed by Simpson alumni as a way to remember and honor those who have achieved great things in both the present and the past.

Jim Thorius, vice president and dean of student development, is looking forward to the arrival and acceptance of the airmen and is grateful to the four men and their families coming to receive the award.

“We’re completely thrilled that we have the chance to honor them this year,” Thorius said. “To have even four of the 12 men from Iowa is even more exciting.”

Walter Lain, assistant dean of multi-cultural and international affairs, is eager for the ceremony and to see the awards presented to the Airmen.”I feel it is a great honor to receive this recognition,” Lain said.

During World War II, segregation was still a major factor in the United States.  At the Tuskegee Institute in Alabama, a group of African Americans decided to conduct an experiment proving that they too were equals and were able to complete the complex tasks of war.  This force was so successful that they were decorated soldiers overseas, but came back to the same segregated country.

In 1947, the United States military finally desegregated their ranks.  The Tuskegee Airmen had well proven their point.  Those who survived went on to become successful adults.

“This is a great opportunity for all to interact with history and real people who are genuine American heroes,” Thorius said.

The Tuskegee Airmen fought more than one battle.  They fought the Axis powers overseas, as well as a battle on United States soil: racism. “A very interesting fact is that all of these men were at the Tuskegee Institute when George Washington Carver was there,” Lain said.

These men challenged authority with over 1,000 African American men.  Of this number, 12 of the members were from Iowa.

“In recognition of these accomplishments we decided to award them this medal,” Lain said.

“I’m looking forward to the interview because my great grandfather served in World War II, at the same time the Tuskegee Airmen did,” Wilson said.

“Because of their tremendous efforts, they really led the way to desegregation,” Thorius said.

There will be a discussion panel the day of the event prior to the speech from 2-3:15 p.m. on Feb. 23 in Lekberg Hall.  Here, students, faculty, staff and other members of the community are free to ask questions of the four men and their families.  The ceremony will also be opened with a pre-event desert reception in Carver Atrium from 6-6:45 p.m.

Speaking at the ceremony will be Wing Commander Colonel Mark Hammond, as well as Robert Morris.  Morris has helped to establish the museum in Fort Des Moines as well as the World War II Tuskegee Memorial.

“The opportunity to interact with these figures of history won’t be around much longer,” Thorius said.