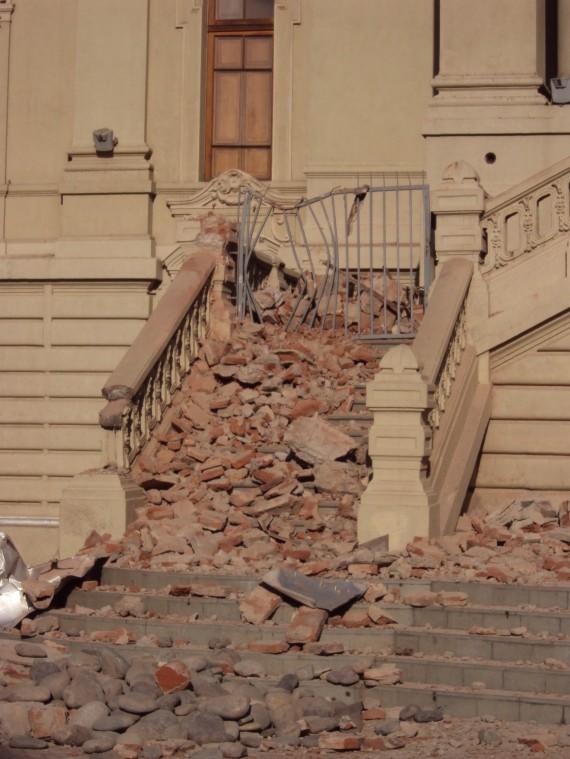 Following the devastating earthquake in Chile, one Simpson College student is doing his part to seek donations to help the country rebuild.Sophomore Gaston Akerman is an international student from Buenos Aires, Argentina and has been leading the donation efforts.

“I’m trying to increase awareness of this sad moment that Chileans are going through,” Akerman said. “I’m doing this by sending out e-mails with information about donations online, and I’m also networking with other leaders of different universities of the state so they can also help.”

Akerman’s efforts have also lead to contacting Massiel Orellana, a Ph.D. candidate at Iowa State University. Orellana, who is from Chile, has created a Web site for people providing links where people can donate money. Orellana has also been giving interviews to different media outlets such as Channel 8 and The Des Moines Register.

The Web site she created includes links where people can text donations for relief efforts. This option is available for Habitat for Humanity, World Vision, The Salvation Army and The American Red Cross. Other groups accepting donations are the Stanford Students and Alumni for Chile, as well as Americans.

Orellana said that the earthquake greatly affected her family and friends.”I was so depressed for a week after it happened,” Orellana said. “I couldn’t even go to work that week.”

Part of the reason the earthquake was so devastating, according to Orellana, was the fact that most Chileans are on vacation during this time of the year.

“Everyone was on the coast, because we go on our vacations to the beach,” Orellana said.

She also said people in Chile are living in fear that the aftershocks from the earthquake will continue.

“People are really scared and they are living in fear of another tsunami,” Orellana said.

One thing Orellana has noticed is that people don’t seem to be giving as much attention to Chile as they are with Haiti.

“This was much worse than Haiti,” Orellana said. “People think Chile is a country better prepared for earthquakes, but not for this magnitude.”

Orellana added that the earthquake has also caused a freeze on jobs in her home country, which affects her as well.

“I might not be able to go back to look for a job,” Orellana said. “I’m going to try and stay here until my country gets back.”

At Simpson, Akerman said that although the relief efforts haven’t really gotten started yet, there are options available to help Chile.

“At the moment, International Students Organization members are putting up fliers around campus to let everybody know what the different options are to donate,” Akerman said.

He also believes that part of the reason the efforts are not as strong as the relief for Haiti, which also experienced a devastating earthquake, is because nobody at Simpson has a direct personal connection to Chile. Akerman also assisted with the T-shirts for Haiti project.

Akerman said that he doesn’t really have a specific monetary goal in mind, but he is using this as an opportunity to educate people.

“I certainly hope to increase awareness of this disaster and the problems that such an event caused, like moving Chilean cities about 10 feet to the west,” Akerman said. “Buenos Aires, Argentina, Fortaleza, Brazil, and other South American cities were also affected. NASA scientists have also credited the quake with shifting the Earth’s axis enough to create shorter days.”

In addition to raising awareness and helping the relief, Akerman said he believes working with relief in Chile is helping to shatter stereotypes.”There are many bad stereotypes between Argentineans and Chileans, but these efforts prove that our countries are more united now than ever,” Akerman said.

Chile was devastated by an 8.8 magnitude earthquake which struck the country on Feb. 27. Initial reports put the number of fatalities at 214, but that number now is over 300.

According to Orellana, there were five parts of the country that were most affected by the earthquake. The total population of these areas is more than 10 million. She also said the earthquake’s epicenter, in Concepcion, is 322.5 miles away from Santiago, Chile’s capital.