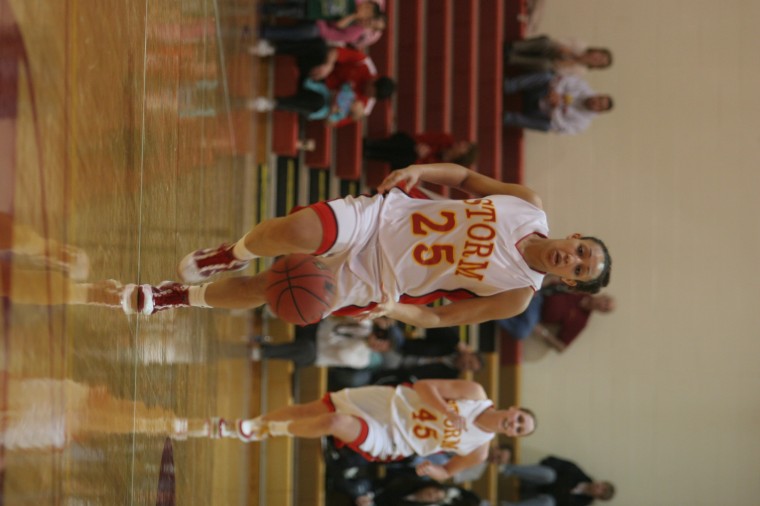 The Simpson women sealed their third consecutive Iowa Conference Championship by defeating Coe on Saturday, Feb. 27, 64-61.”I am looking for a team that’s playing to win, not a team that’s playing not to lose,” coach Brian Niemuth said.The Storm played up to Niemuth’s expectations by defeating the Kohawks and finishing the season 22-5.”That was the hardest we have played for an entire game this year,” Niemuth said.The win earned the Storm an automatic bid into the 2010 NCAA Division III Women’s Basketball Championship. They will take on the 19th-ranked University of Chicago in the first round on Friday, March 5.Simpson ended the first half leading 27-20 and then came out with an 11-7 run in the first few minutes of the second half to give the Storm their biggest lead of the game.The Storm only shot 34 percent from field goal range in the first half, but increased it to 50 percent from field goal range and 3-point range in the second half.Junior guard Darrina Bledsoe of Glendale, Ariz. had her best game of the year by scoring 15 points. Bledsoe shot 6-10 from field goal range and put away 3-pointers as well.Senior guard Katie Kitzman, a Gilman native, had six rebounds and added 12 points to the team total, scoring nine of those points in the final 20 minutes of the game.”I knew it would be a tough game, but I also knew we were the better team and that if we played our game, we would win,” Kitzman said.Coe’s junior forward Kayla Lincoln led the Kohawks with 18 points, 16 of them added in the second half. Sophomore forward Kayla Waskow had five assists and 14 points.The Kohawks battled the Storm, making it a one-point game in the last minute, but a layup by Bledsoe and a pair of free throws by Kitzman sealed the game for the Storm.Simpson senior guard Emily Smith of Ogden said the win over the Kohawks was definitely a team effort.”It’s a great feeling to be able to continue to carry on the reputation of our program,” Smith said. “I am so proud of all of our girls tonight. Everyone worked well together and we were able to pick each other up.”Smith said the Storm women exceeded her expectations during the game.”Our ability to maintain our composure with such a crazy crowd was great,” Smith said. “We were able to put forth a full 40 minutes of intensity and being able to do so is what made us come out on top.”The Storm has won six of the last 11 Iowa Conference tournament championships.Kitzman said she is ready for the national tournament.”I’m extremely confident right now because we are playing extremely well as a team,” Kitzman said.Niemuth said he has a group of ladies that want to be successful, that want to win.”I am very happy for the ladies,” Niemuth said. “They have worked really hard all year and deserve this.”The Storm takes on Chicago at 5 p.m. Friday in the Shirk Center on the Illinois Wesleyan campus in Bloomington, Ill. The 19-6 Chicago Maroons earned an at-large bid after losing to Washington-St. Louis in the UAA conference title game.