Keep the change, laundry change that is 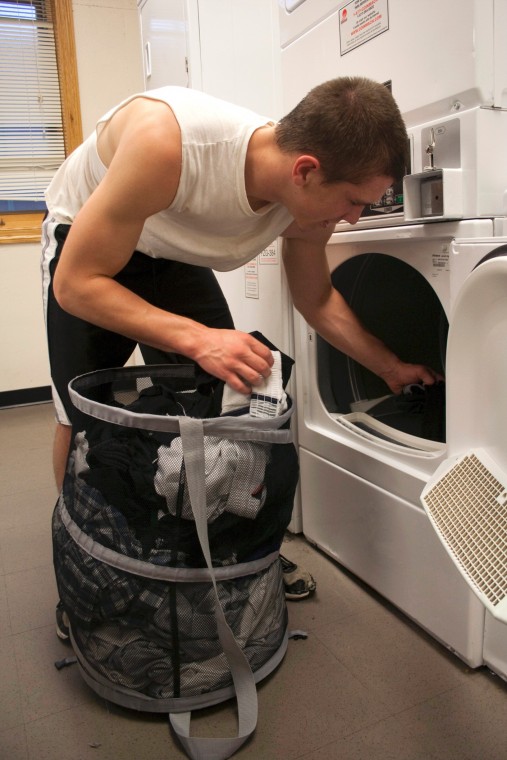 Next fall, Simpson College’s laundry program will be undergoing a complete makeover. Students will no longer have to pay quarters each time they want to wash a load of laundry. Instead, the cost of the service will be factored into students’ room rates at the beginning of each year.

The change, which has been in the works for several years, will be happening this August, before students return to campus.

“We are changing out all of the old machines on campus with new, energy-efficient machines,” Luke Behaunek, director of Residence Life, said. “As a result of the new program we’re moving to, we’re including laundry in the room rate just like cable television or wireless Internet. No more quarters, no hassle with trying to dig up change, and no need to worry about a separate laundry card or going home to do laundry.”

Behaunek said the change came about for a multitude of reasons, one being the fact that the machines were getting older.

“One of my goals this year was to evaluate our options and talk to other schools around the region to see what they were doing,” Behaunek said.

Three options were available to Simpson. One of them was to continue the way Simpson does it now, by using quarters to operate machines. The other was using a card to pay for laundry. However, according to Behaunek, the card system had many disadvantages.

“It’s like a gift card for your laundry, but it’s not attached to your ID,” Behaunek said. “So there was a drawback in that there’d be a separate card system. Moving to a laundry system which enabled you to use your ID was cost-prohibitive to the college.”

The third option is the one that the school will adopt this coming fall. After researching this system at other colleges, Behaunek brought all three options to the Residence Hall Association, which came to a consensus on what option it preferred.

“Through our Residence Life liaison, Joe Sorensen, we took it to SGA for their feedback,” Behaunek said. “That’s the direction we chose to go.”

The replacement of all 125 units that are currently on campus will be especially advantageous to students who live in theme houses. With the laundry being added into the room rate, theme house residents will now have their washing machines provided to them.

“Currently, students in theme houses provide their own laundry machines,” Behaunek said. “They generally just buy them from the house before them, but that’s dangerous in the sense that if a machine breaks, they’re responsible for replacing it. That’s quite a big responsibility for college students to have, and I didn’t think it was fair to those students to have them be responsible for something if it breaks.”

Although an official announcement has yet to be made, Behaunek plans on making one towards the end of the spring semester informing them of the decision.

Freshman Bobby Dennis thinks the change is a good idea, but worries that more people will use the machines and less will be available.”I’ll be doing laundry a lot more often, and I assume the access to washers and dryers will go down,” Dennis said.

Freshman Ken Jaeger said he’s disappointed he’ll still have to pay for laundry, but also said he will like not having to find quarters.

“I think it’s good to have us not use quarters,” Jaeger said. “It’ll be good not saving up and not having my pockets jingle.”

Behaunek said he believes there will be a number of advantages for students.

“Having new machines will increase student satisfaction with laundry immensely,” Behaunek said. “We’re moving away from those old machines to these that are more reliable. They’ve been proven to dry faster; the washers spin so fast that more water is actually removed from the clothing.”

“The washers use about 30 percent of the water of the current washers, so we’ll be saving a lot of water in that sense,” Behaunek said. “From what I’ve heard from other schools, this type of program has gone over well.”