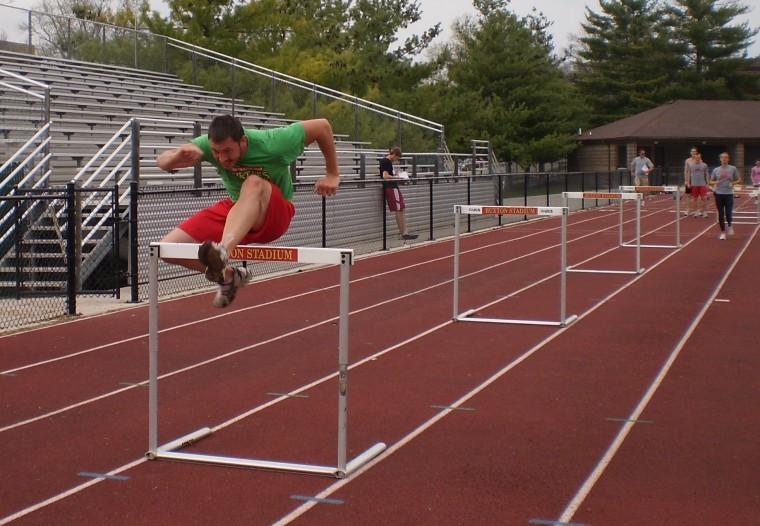 Members of the Simpsonian sports staff chose one athlete from each spring sport to honor as a member of our All-Simpson Team.

Lauren Bucklin The senior from Bondurant has turned in another great season on the track for Simpson. Bucklin will be running at the Drake Relays this weekend in the 100-meter hurdles, an event she provisionally qualified for after just one meet.

Bucklin is the only Division III athlete competing in the women’s 100 hurdles at the Drake Relays, and just turned in her best time of the year (14.34). She hopes to repeat as Iowa Conference champion in the 100 and 400 hurdles May 14-15 and have a strong performance at the national meet May 27-29 in Cleveland. “I’m hoping to make finals at Drake,” Bucklin said. “I want to get qualified in the 400 hurdles and just get faster as the season goes on. It would be awesome to get our 4×400, or any relay, qualified for Nationals.”

Martin Rounds Rounds is a senior sprinter from Council Bluffs. While competing at the Jim Duncan Invitational, Rounds placed in the top-10 of three events. He placed second in the 110-meter high hurdles (15.08) for his best time of the year. He also finished sixth in the 100-meter dash (10.95) and seventh in the 400 hurdles (56.89.) He’ll compete in a couple relays at the Drake Relays this week. “I’m excited to get back up to Drake,” Rounds said. “I’m looking forward to running on that track one more time.”

Megan Smith The Storm played its first meet at Pella and senior Megan Smith of Eagle Grove lead the way finishing tied for ninth. She improved her score by 11 strokes from the first day to the second. Her second round score of 81 was third lowest in the tournament. “I played a lot better the second day at Pella,” Smith said. “The goal is to improve after every 18 holes and every weekend.”

James Montgomery The junior from Knoxville has led the Storm in the early part of the spring season. Montgomery got out of the gate quickly at the Simpson Invite March 30, finishing second overall (+2). He led Simpson at the Grandview Invite as well, finishing 16th overall (+5). He has a low round of 71 for the season.

Tiffany Bost Although the spring is technically the offseason for women’s tennis, Tiffany Bost is playing like it’s mid-season. The freshman from Spokane, Wash., is playing No. 2 singles and No.1 doubles. She is 3-3 in singles, including one match at No. 1, and 4-2 in doubles with partner Jill Berner. Bost will look to fill the No. 1 singles spot next year. “We just played Central and Jill and I beat them in doubles,” Bost said. “We were on that day, it felt good.”

Noah Saunders Saunders, a junior from Norwalk, has been playing No. 1 singles for much of the year. He won his match against Buena Vista last week, 6-1, 6-2, and won No. 1 doubles, 8-3, with partner Adam Summit. Those two victories helped Simpson achieve its best score versus a conference opponent this spring.

Whitney Oviatt The senior pitcher from Carnation, Wash., has been leading the Storm all year, and especially during Iowa Conference play. Oviatt has earned all eight wins versus IIAC opponents (8-0). In 47 innings pitched in conference, Oviatt has only given up six runs for an earned run average of 0.89. Conference opponents are hitting a mere .153 versus Oviatt.

Dave Johnson With a .411 average, the junior shortstop from West Des Moines has been unstoppable at the plate. He leads the team in slugging percentage (.811), on base percentage (.481), runs scored (36), triples (four), home runs (seven), multiple hit games (12) and total bases (77). He has also had five multiple RBI games with a total 0f 25 RBIs on the season and has tallied 83 assists at shortstop.