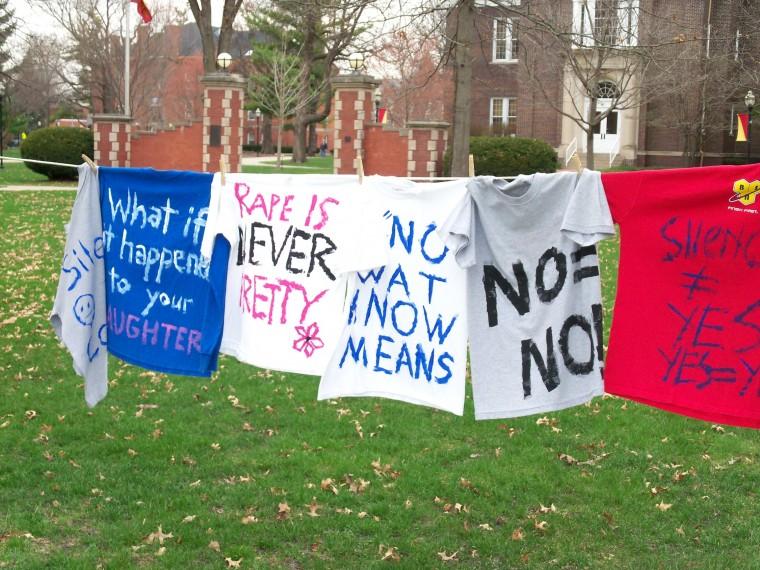 The Clothesline Project came to Simpson College back in 2007 and the project continues to help raise awareness on campus about the issue of violence against women.

“The Clothesline Project is a project to advocate for the end and fight against the issue of violence against women,” sophomore Hannah Landgraf said. “The shirts are decorated and hung up as a testimony to the very real problem that is occurring today in regards to domestic and sexual abuse against women.”

This year, several groups on campus have come together to create these messages for people to see. Sponsors included SOPHIA, Greek Life, members of the Kate Shelley Women’s Resource Center and SARA. T-shirt making parties were held at various locations by the sponsors. Participants decorated shirts in order to bring the issue of violence against women to life.

“(The shirt I made) has handprints on the chest area that are crossed out and then underneath it says ‘No Touchy,'” junior Kasarah Menegon said. “It signifies that men should not feel like they are able to touch women whenever they want.”

The ideas for the sayings and drawings on the T-shirts came from many different sources, including movies, quotes, and personal statements.

“Some people take inspiration from shirts of the past while others go wherever their creativity takes them,” senior Miranda Knake said. “It’s awesome to watch what people come up with! One of my favorite T-shirts made this year said something to the effect of ‘Flowers are pretty, would you rape them?'”

Though the shirts are different, all of them come together for one specific purpose.

“During the painting sessions people are given a shirt, some paint and the opportunity to express their thoughts on the subject in any way possible,” Landgraf said. “Both males and females take part. Some of the shirts are personal and mean a lot to the artist as they may have been a victim to violence or may have personally known someone who suffered from physical or sexual abuse. Others just wish to show their support for the end of violence against women.”

This year, there were a total of 98 T-shirts created and hung around campus.

“The amount of shirts up…is just a fraction of people showing how much they care about being a voice for women affected by sexual violence,” junior Danielle Caswell said. “It’s important to have this on campus because it has been a touchy subject for people to discuss with peers.”

Caswell also said that the project is a great way for people to physically see what they can do to help end violence against women.

“I feel this project not only stands as a voice of support to empower women but it helps foster discussion of such an important issue,” Caswell said. “Since we can’t all hang out on a clothesline all day, we can instead visualize women as though they were in the shirt, voicing the painted statements. It’s inspiring and comforting to know that there are people out there standing up and saying ‘No’ to sexual violence.”