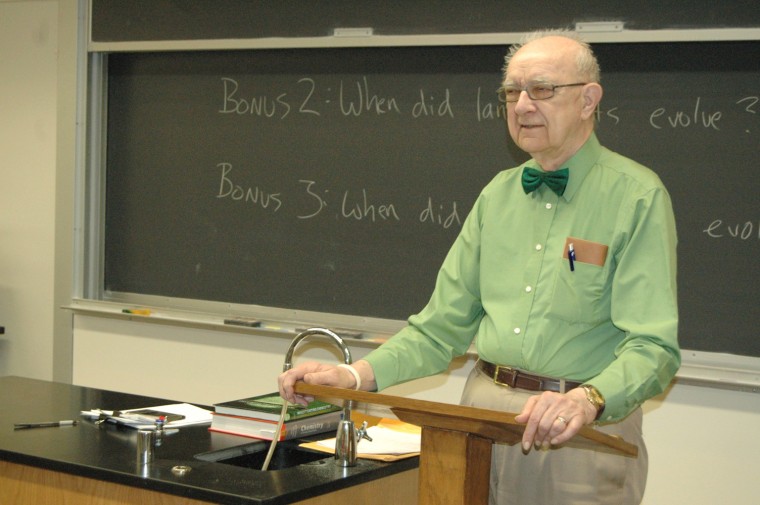 After 52 years of teaching at Simpson College, Professor Cliff Meints, is turning in his infamous bow ties, or at least some of them.

The George Washington Carver professor of chemistry has decided to cut back to part time and teach a reduced course load beginning next semester.

“I will probably be teaching about a half a load in comparison to a normal load,” Meints said. “At the moment, they’re planning on me being around for another two years, but it could be longer than that. I’ve been thinking about doing this off and on for a while, and in my time here, I’ve seen one professor die in office—while he was still working full time.I’m already 15 years past the legal retirement age, and if something were to happen to me, the school wouldn’t have to scramble as much to find a replacement for my classes since I’ll only be part time.”

Meints has taken several sabbaticals throughout his career that have provided him opportunities to experience different teaching atmospheres.

During Meints’ years of teaching, he has taught a variety of classes, but he said that regardless of the other classes, chemistry is still his favorite to teach.

Junior Curt Tennison remembers the May Term that he had with Meints.

“I had a May Term with Prof. Meints,” Tennison said. “It was the “C.S.I. Simpson—Who did it?” course, which covered a lot of how forensic science was started and things like that. I thought that Meints was a really good teacher, and I became really interested in the material. He definitely had a lot of fun activities for us to participate in.”

Meints said he might use his time to volunteer.

“I’m not a woodworker or a golfer,” Meints said. “I don’t really have a time-occupying hobby. I might try to find some kind of a volunteering group to use up some of my free time—but I haven’t really started looking in depth at that yet. The only two that have occurred to have volunteering possibilities would be a blood bank volunteer or a volunteer at a hospital.”

Even though Meints will be around after this semester, some students feel like they won’t get to see him on a regular basis.

“I love Dr. Meints,” sophomore Lesha Simpson said. “I’m so sad to hear he is cutting back his hours because he can always make me smile in class.”

However, Meints says that he has the support of his colleagues.”My colleagues have been really supportive through this,” Meints said. “They’ve hired a full-time replacement in case something should happen, and overall have just shown support.”