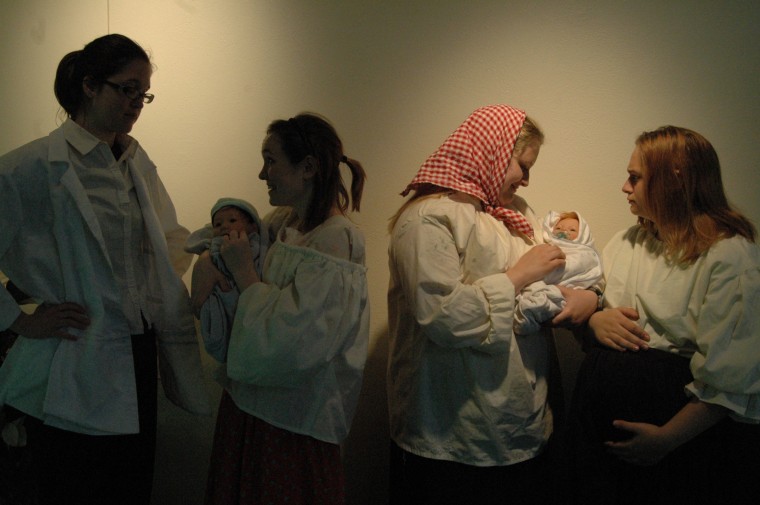 The seventh annual Festival of Short Plays will be put on by the Simpson College Theatre Department April 16-18 in the Blank Performing Arts Center. More than 30 theater students will be acting and working backstage for the series of short plays, which will be directed by the senior theater majors Kyle Bochart, Candace Zak, Kellie Green and Danille Brown.

Bochart said he hopes to get more directing experience while learning about the genre of political theater.

“The theme changes every year,” Bochart said. “This year is ‘Disturbing the Peace.'”

Bochart will be directing the show “I Think About You a Great Deal” by Arthur Miller and wrote the scripts for the transitional scenes to be performed between the plays.

“Each festival is different,” said Zak, who will direct “Catastrophe” by Samuel Beckett and “Mistake” by Václav Havel. “They each center around a different topic that comes out of the Senior Theatre Seminar class, ranging from this year’s Political Theatre and Václav Havel to American Theatre of the 1920s to Theatre of the Absurd.”

Zak said that the goal of this year’s festival is to give the audience a greater understanding of totalitarianism in Eastern Europe in 1989.Green is the costume, hair and makeup designer for the festival. She said she hopes the audience will be more emotionally involved with the pieces the four directors have chosen than in past festivals.

“I think these plays are going to have more compassion behind them because they are about real people’s lives,” Green said.

Zak said that the festival is a great way to showcase the seniors’ talent and experience in theater.

“The purpose of festival is to not only give the students an opportunity to showcase their work as designers, directors, actors and more, but to give the seniors one last project to bring together everything they have learned through their Theatre Simpson education,” Zak said.

This is the final project of the seminar class for the seniors in the Simpson theater program as well as the final production of the theater season.

“This is a big stepping stone for all of the theater students to get a feel of what a theater company is about,” Green said.

Zak said that she is personally learning a great deal about different aspects of theater and of group leadership in her directing position.

“I want to put on a great show for sure, but I also want to affect the audience in a significant way, make them think about things,” Zak said.

Green also said she hopes the audience will gain a greater understanding about what happened in Eastern Europe in 1989.

“No one remembers what happened during that time,” Green said. “I want people leaving knowing who Václav Havel was, what he did and what these plays also represent.”

All of the seniors encourage non-theater Simpson students and faculty to attend the festival for impressive entertainment, as well as educational, experience.

“I think a lot of people are going to be very surprised with the plays,” Green said. “I’m really excited for people to come see it.”

Tickets for the festival are available online, in the BSC, or at the box office in the Blank Performing Arts Center. For more information on the festival, visit www.simpson.edu/theatre or the Simpson College Theatre Arts Facebook page.