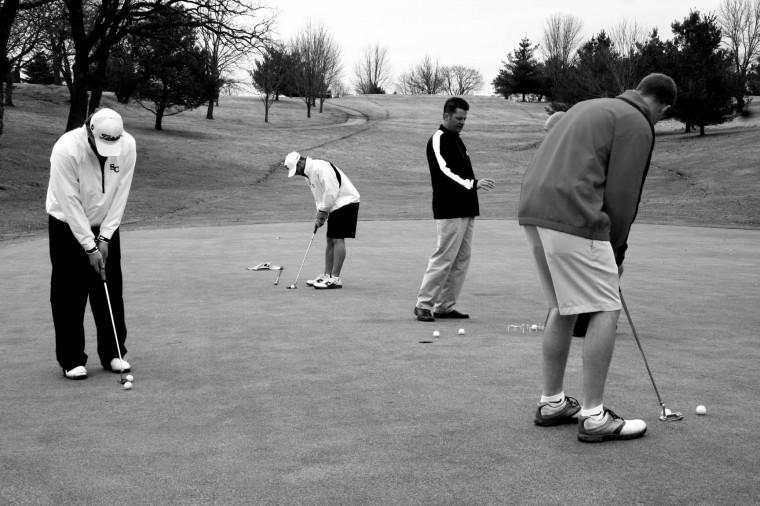 The men’s golf team has a little over two weeks until they compete in the Iowa Conference tournament. Until the tournament takes place, one common goal among the team’s top golfers is consistency.

Senior John Richter, a Marshalltown native, said the team doesn’t just want to play consistent, but they want to be near the top of the conference at season’s end.

“Our goal like every year is to get top three at conference,” Richter said. “The meets up to conference really don’t mean anything. They’re just kind of warm-up matches.”

Senior Jon Sukut, of Ankeny, said the tournaments over the next two weeks will help decide who the go-to guys are going to be when conference rolls around.

“I’d say these tournaments are trying to figure out what five are going to play in conference,” Sukut said.

Even though the conference tournament is top priority, the team still has a couple of meets they are looking forward to.

“The BV and Wartburg invite will be a good warm-up to the conference tournament,” junior Michael Peterson said. “And I think we are all excited to play in Grandview’s invite at the Harvester, one of the best courses in Iowa.”

Sukut and Richter both agree that when it comes time for the conference tournament, Central is going to be the toughest competitor.

They also said Wartburg and Luther would bring competitive teams to the tournament.

Sukut talked about what the team will be focusing on in practice the next few weeks.

“I’d say we’re all just kind of working on the little weaknesses we each have in our game,” Sukut said.

Peterson talked about what he thinks the team is capable of accomplishing in the conference tournament.

“I think if we all shoot to our potential we can beat anyone,” Peterson said.  “It’s just a matter of everyone playing solid on the same days. We have the ability to contend for a conference championship, and hopefully we can peak at the same time and put together a good team score.”

With the conference tournament taking place over two weekends, April 23-24 and April 30-May 1, and two different locations, Iowa City and Waverly, Sukut said the key for the tournament will be to play smart.

“I think the biggest thing we need to do is just hang out that first weekend,” Sukut said. “And leave us in position to make a move on the second weekend.”

“I would say our big goal is to put a good team together at conference and do better than we did last year,” Richter said.

Peterson added that the tournaments coming up will prepare the team for the challenge they face at the conference tournament.

“With some good tournaments coming up and another month or so of practice I think we’ll be in great shape to finish at the top of the conference,” Peterson said.