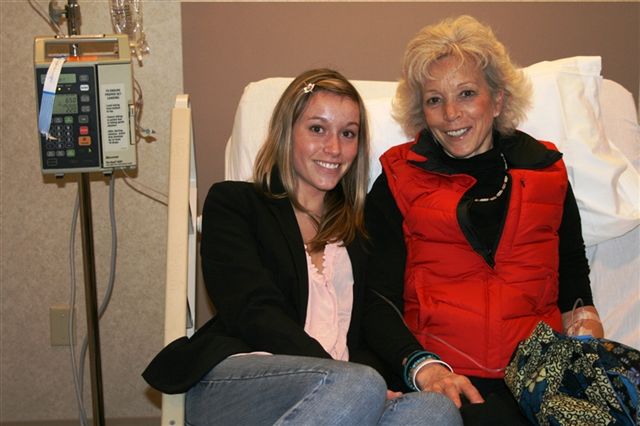 This May, several members of the Simpson College community will be running in the Walk/Run to Break the Silence on Ovarian Cancer.After librarian Kristi Ellingson was diagnosed with stage 3C ovarian cancer in May 2008, colleagues and family members came together to start the Bald Eagle team.

“My oldest daughter chose the name,” Ellingson said. “When I lost my hair my daughters called me bald eagle. You see, our family thinks bald eagles are magnificent birds… the bald eagle is a strong bird, so it’s a symbol of strength.”

After the diagnosis, Ellingson’s first reactions were shock and disbelief, and she wasn’t sure how to tell her family. She spent most of her energy focusing on getting better and left the research and information-gathering to her family and friends. This is when they learned about the walk.

This is the third annual walk to benefit the National Ovarian Cancer Coalition. The event will take place at Raccoon River Park in West Des Moines on May 8.

The event will include speakers, survivor photos, a performance by the Des Moines Isiserettes drill and drum team, along with the newly added 5K walk and 5K timed run and awards. Hopper has gotten 30 friends, family members and co-workers to join in the run and walk. Both Hooper and Ellingson will be participating in the run and they have been training everyday in preparation for it.

“This is my first time walking the 5K,” Serials Librarian Liz Grimsbo said. “I think it will be interesting to see how many people will turn out for this kind of cancer fundraiser. Last year I walked for the cause around Grey’s Lake, and it was a great time.”

According to the NOCC, more than 20,000 women in the United States are diagnosed with ovarian cancer each year. Ellingson encourages all women as soon as they are of age to go to their doctor to be checked for both breast and ovarian cancer. Each year, 15,000 women die from the disease.

“Women need to be aware of their bodies,” Ellingson said. “Listen to your body.”

In addition to all of the excitement of fundraising for the campaign, Ellingson is excited for another reason as well. With only one cycle left of chemotherapy she will finally have a break, which coincidentally will be the days after the walk.

Ellingson encourages the Simpson community to think about donating to the cause, either by participating or by giving a monetary donation.

“Anyone is welcome to join our team or to make any size donation to our team,” Ellingson said. “General donations are accepted or a donation may be made to any individual team member by selecting their name.”

Donations and more information about the race can be found at http://nocc.kintera.org.