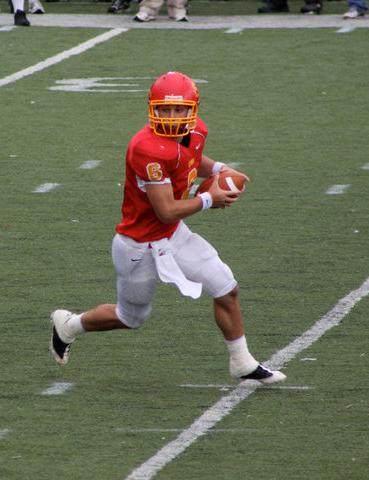 If consistency was the key to unlocking the Storm’s door to a conference game win, then they found it. Consistency and mental focus are what allowed the Storm to defeat the Loras Duhawks 14-7 in their opening conference game Saturday, Sept. 18th.

After a 0-2 start to the 2010 season, Storm Football needed to overcome a hurdle or two, starting with themselves.

Head Coach Jim Glogowski commented before the game against Loras that the Strom’s biggest enemy was the Storm.

In the game against Loras, the Storm followed its coach’s instructions. The team ran the ball for 330 yards of total offense, more yards than their first two games combined. Senior Matt Claassen led the team with 71 yards on 15 carries, followed by freshman Michael Chia with 51 yards and a touchdown.

“We have had bright spots on both sides of the ball in our first two games,” Claassen said. “We just need to continue to execute more consistently.”

The Storm took an early lead when sophomore Austin Schmidt made a 6-yard touchdown. From then on, the Storm continued to rush the ball.

“We want to be the kind of team that runs the ball and controls the clock,” Glogowski said.

On the defensive side, the Storm was successful in holding the Loras offense to few yards. Loras’ only opportunity to score came from a Simpson fumble from its own 23-yard line.

Assistant Coach and Defensive Coordinator Mike Cordes said he feels that the Simpson defensive line is something to watch out for.

“One of our strengths is that we have three really big guys who can handle a lot in size match-ups on the line,” Cordes said. “We have a faster and quicker line from a year ago. We need to utilize our speed.”

The defense proved that it is a powerful force in the IIAC conference. Junior Colton Calvert and sophomore Justin Perry gained two sacks each. Big plays also came from sophomore J.J. Nair, who made three tackles for loss, a sack, and a forced fumble. Junior Braden Everding also showed skill with nine tackles and an interception against the Duhawks.

“Guys like Braden Everding and Paul Scaletta are really stepping up for us,” Cordes said. “We need that kind of consistent leadership out on the field.”

Simpson now holds a 1-0 conference record and a 1-2 record overall.

“I’m so happy for the kids,” Glogowski said after the win. “They’ve been playing hard and it’s nice to see them reap the rewards today.”

The Storm will play its next conference game against Buena Vista on Sept. 25 at 1 p.m. in Storm Lake. The next home game will be Homecoming, which is scheduled for Oct. 2 against Luther College.