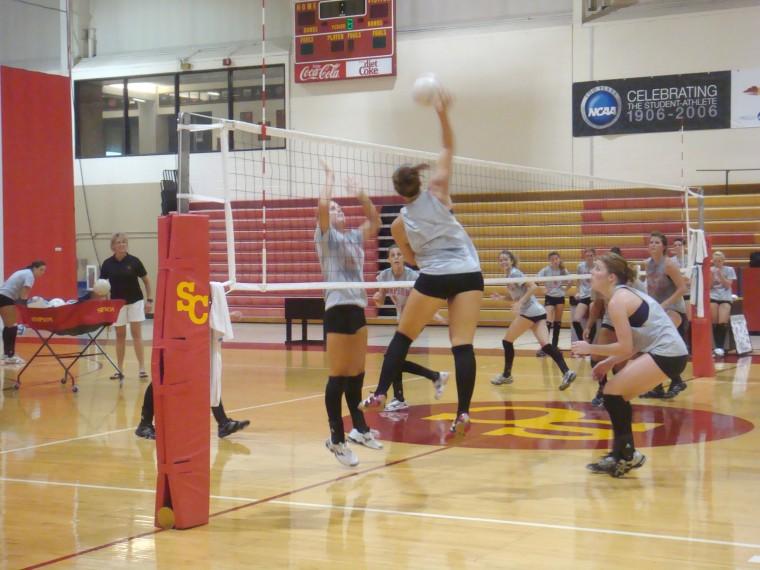 Pre-season polls are just numbers. And that’s how this year’s Storm Volleyball team is treating them.

According to the Iowa Intercollegiate Athletic Conference (IIAC) website, a poll of conference coaches has selected Wartburg as the top team to take the conference title. But the ladies of the Storm Volleyball team aren’t about to let that happen.

Simpson sits at number three in the conference, but still has sights set on number one. Senior outside hitter Amy Schuster knows that it will be a dogfight for the top spot.

“There is always a target on your back as number one,” Schuster said. “No one expects us to be as good as last year. It will be fun to prove everyone wrong, and show them we deserve to be number one.”

Junior middle hitter Megan Dunlavy agrees, it will be a battle in every match even though the Simpson has many strengths on the floor.

“This year we will be strong because of how badly we want to win,” Dunlavy said. Dunlavy, a returning player, had the third highest hitting percentage in the conference a year ago.

“We are willing to lay it all on the line because we want to win the conference tournament and go to nationals just like last year,” Dunlavy said. “We are a great serving team, and it will be hard for teams to get a good, controlled offense going when we are pounding serves at them.”

After a very successful season last fall, Storm Volleyball has big shoes to fill. Graduated All-American setter Tara Christensen led the Storm into the national tournament, which only made this year’s team hungry for more success.

Schuster, a two time all-IIAC player, feels confident that despite having gaps to fill, the Storm will keep their focus and won’t let weaknesses show.

“Our goal is to be the best defensive team in the conference,” Schuster said. “We have such a strong team because of our communication both on and off the floor. We’ve all played together, and everyone does their part. We have a lot of depth and versatility this year. We also have great senior leadership, but are looking for underclassmen to step up and try new positions. It’s all about being confident.”

Head Volleyball Coach Lana Smith begins her 13th season as head coach and is excited to see the team accept the challenge.

“We have a very resilient team, but we have to come to practice every day with a purpose,” Smith says. “We need to commit to working hard with our focus on one element every day. We write down our goals and keep them in sight throughout each practice. These girls know what they have to do.”

Smith holds a win record of 221-161. She knows that to keep the fire alive, there will need to be support across the floor. Schuster agrees that the support will be a necessity.

“We need to have support from the entire team, the bench and the crowd,” Schuster said. “It’s what really gets us going.”