Celebrating 150 Years of Fads and Fashions 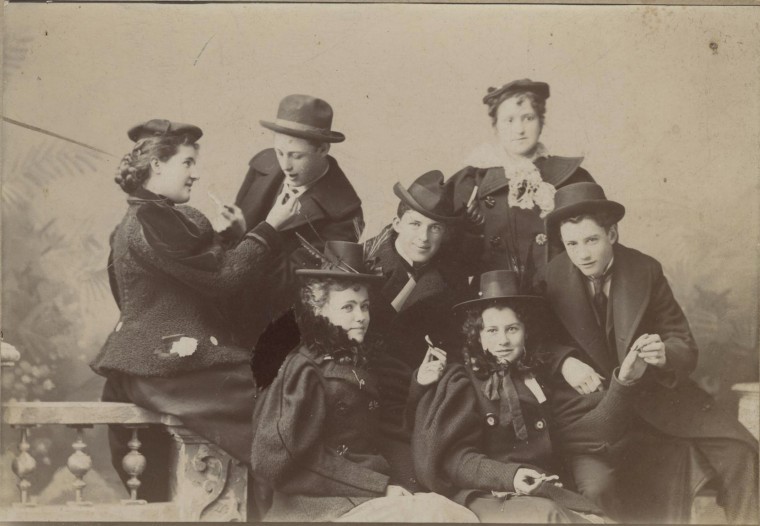 From dresses and suits in the 1860s to sweatpants and tank tops in 2010, Simpson’s fads and fashions have changed drastically since its establishment.

When it all began in 1860, men with long sideburns and mustaches sported suits to class while women trekked through campus with long, heavy skirts. The only skin women showed off was on their hands. Times have changed.

“I’d say it was much more relaxed these days,” sophomore Caitlyn Deimerly said.

In the 1890s, men continued to wear suits along with ties, bowties and facial hair. Women wore dresses with massive, puffy sleeves and also wore their hair in a small tight bun right on the top of their heads.

Ladies’ hair began to grow in volume in the 1900s, often accessorized with a flower or bow. Dresses became simpler with a thinner silhouette.

If you have ever complained about sweating during a sport, imagine playing basketball in the 1900s. Women wore black neck-to-ankle dresses complete with black stockings and shoes.

In the 1930s, the length of men’s sports shorts became very short. Everyday wear was more casual with slacks and a button up shirt and tie.

Just like the men, ladies’ fashion transformed as well. Women chopped their hair to jaw-length wavy bobs. Different kinds of dresses were worn from long free-flowing dresses to a cardigan and button up skirt.

Jackie Kennedy was a huge influence around the world as well as at Simpson College in the 1960s. Girls followed Kennedy’s style and wore everything from capris to sorority sweatshirts with both pencil and full skirts.

The men of the 1960s buzzed their hair off along with the rolled up t-shirt sleeves. Also around this time the freshman were required to wear a certain accessory.

“They were called freshman beanies and they had their graduating year on them,” Simpson College Librarian and Archivist Cyd Dyer said.

The 1970s rolled in with long hippy hair, plaid pants and funky prints.

“Everything is cycling back,” Dyer said. “My daughter always asks why I didn’t keep my clothes from the 70s. I didn’t know they’d come back into style.”

There were overalls, wide legged jeans, above the knee skirts and knee-high boots. Punk was in as well as a comeback from the ‘30s and ‘40s.

The 1980s brought shoulder pads, huge glasses and high wasted jeans, oh my! Fedoras, wayfarer glasses, sport’s t-shirts and plaid were worn by both men and women alike. Men wore shorts so short that little was left to the imagination. Perms were awful enough, but girls needed more, teasing their hair to kingdom come.

“The ‘80s were just an ugly time for everyone with that hair and those glasses,” Dyer said.

Men cleaned up and cut their hair in the 1990s, and high wasted pants still had yet to die. Big hair lingered in the beginning of the decade, but women slowly tamed it down a notch.

With the Y2K scare came new fashion. High wasted jeans hit the garbage can, but not for long. Textured hair, striped shirts and women’s jackets were popular. Preppy was a style of the early 2000s.

After traveling through the past we arrive here in 2010. We have the outrageous fashion of Lady Gaga to show that anything goes. Fashion is so diverse and people create their own styles according to who they are.

“One of the joys of my job is that I can dress however I want,” Nancy St. Clair, professor of English and chair of the humanities division and chair of women and gender studies, said.

Students can only speculate as to what future styles may be, but the past makes it certain that Simpson College is ahead of the curve.