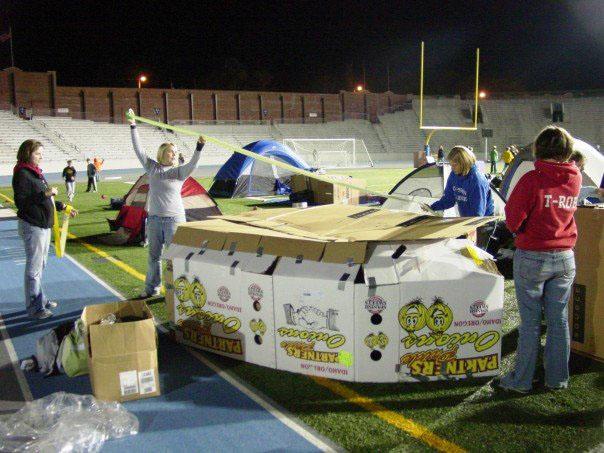 Simpson students along with many others will be sleeping under the stars at Drake Stadium in honor of Reggie’s Sleep out.

Reggie’s Sleep out was formed after a young boy, Reggie Kelsey, died not long after outgrowing foster care. Kelsey is only one of the many young adults in Iowa that are homeless, and his death was the start of a foundation that has raised over $100,000.

Simpson has been nationally recognized for the large number of community service hours its students and faculty have recorded in and outside of the Indianola community. Therefore, it is no surprise a team is going to represent Simpson in the sleep out.

Simpson first participated in 2006 when Assistant Director of Admissions Tiffany Berkenes came across an article about Reggie’s Sleep Out online. Berkenes informed the campus and had 45 students take part. This year Berkenes has set a goal of 50 students and to raise $500, and the team has already collected $220.

“Simpson’s involvement shows how much we care beyond the campus into the local communities,” Berkenes said. “It opens our minds and gives us a better understanding of what being homeless would be like.”

There are events throughout the night that are educational and entertaining such as the best box contest, food and music.

Senior Megan Culbertson is participating this year for her second time. Culbertson has a passion for homeless outreach and thinks it is a fun way to raise money for a good cause.

“It is a good experience to find out what it is like to be homeless when I was freezing and wearing six layers of clothing,” Culbertson said.

According to study done by Iowa Institute for Community Alliance, there are an estimated 23,000 homeless people in Iowa. An estimated 10,000 of those people are in Polk County and 37 percent of the homeless in Iowa were under the age of 18 in 2009.

Junior Kelsey Politte has not participated in the sleepout, but after hearing about the cause she is intrigued.

“It’s a tragic story what happened to Reggie, but it sounds like a great, fun way to raise money for the cause,” Politte said.

“It’s awesome to see how many students are willing to give up their time to do this,” Berkenes said.

Interested in getting involved but can’t attend Reggie’s Sleepout? Visit www.iowahomelessyouth.org where information is available for donations, volunteering, and opportunities for helping youth in the community.